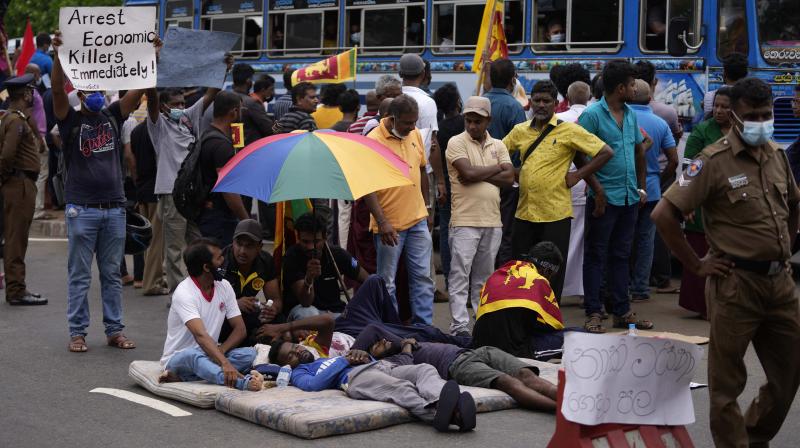 Colombo: Sri Lanka's Parliament is set to convene on Wednesday for a crucial session, a day after Sri Lanka's main Opposition party SJB handed over to the parliamentary Speaker motions of no-confidence against President Gotabaya Rajapaksa and the government for mishandling the country's worst economic crisis.

Samagi Jana Balawegaya (SJB) handed over to the parliamentary Speaker Mahinda Yapa Abeywardena motions of no-confidence, even as the government announced the appointment of a Cabinet sub-committee to look into the proposal for a new Constitution.

We met the Speaker at his residence and handed over two no-trust motions, the first one against the President under Article 42 of the Constitution and the other against the government," Samagi Jana Balawegaya (SJB) General Secretary Ranjith Madduma Bandara said.

We want these taken as quickly as possible," Bandara said.

Article 42 stipulates that the President is responsible to Parliament for the exercise, performance and discharge of his functions.

Any motion needs seven days' notice before getting into the order paper for debate. The date has to be agreed upon at the party leaders' meeting where the business of the House is agreed upon.

The Parliament meets Wednesday for the first of eight sittings this month.

In the normal business listed for Wednesday, Finance Minister Ali Sabry is to inform the House of the talks with the IMF held in Washington last month.

Sri Lanka reached out to the IMF for a possible bailout after suffering its worst economic crisis since independence. Sabry told reporters last week that Sri Lanka's foreign reserves were at zero levels.

Meanwhile, a possible secret vote on Wednesday in parliament for the deputy speaker's position could become vital to prove the majority in the House, analysts said.

The SJB said they would field a candidate for the post of Deputy Speaker of Parliament. The position has fallen vacant with the resignation of the incumbent Ranjith Siyamabalapitiya.

Siyamabalapitiya is part of the Sri Lanka Freedom Party (SLFP) of the former President Maithripala Sirisena which had split from the ruling Sri Lanka Podujana Peramuna (SLPP) coalition.

We will be fielding our candidate for the position (deputy speaker) if the Speaker announces it today," Harshana Rajakaruna, a main opposition SJB legislator told reporters.

The vote would only be possible if president Gotabaya Rajapaksa acknowledges Siyambalapitiya's resignation.

Prime Minister Mahinda Rajapaksa is also expected to make an announcement on Wednesday, the ruling party sources said. He is expected to announce that he would not be resigning his position as he still commands the majority in the House, they said.

Meanwhile, the main Tamil party along with the former prime minister Ranil Wickremesinghe's United National Party (UNP) are to jointly move a no-trust motion against President Gotabaya Rajapaksa, which would imply that the House had lost confidence in the President.

The TNA/UNP motion has no legal binding for the President to resign.

This problem can only be solved if either the President or the Prime Minister resigned. It is up to them to make a decision," former prime minister Wickremesinghe said.

Under Article 38 of the Constitution, a president can be removed only if he/she volunteered to resign or through the long process of impeachment.

Experts said if the government would be defeated in the SJB motion, Prime Minister Mahinda Rajapaksa and the Cabinet would have to resign.

On Tuesday, the government announced the appointment of a Cabinet sub-committee to look at the proposal for a brand new Constitution.

Prime Minister Mahinda Rajapaksa had proposed to amend the Constitution to create an accountable administration that met the people's aspirations, amid large scale protests against the government over its handling of the economy.

President Gotabaya Rajapaksa while showing reluctance to sack his older brother conveyed to the parties that he would be willing to set up an all-party interim government if the parties could muster 113 votes in the 225-member assembly.

Both Rajapaksas are coming under increasing pressure to step down in the simmering economic meltdown where people struggle with all essentials, including having to put up with power cuts.

Sri Lanka is currently in the throes of unprecedented economic turmoil since its independence from Britain in 1948. The crisis is caused in part by a lack of foreign currency, which has meant that the country cannot afford to pay for imports of staple foods and fuel, leading to acute shortages and very high prices.

Thousands of demonstrators have hit the streets across Sri Lanka since April 9, as the government ran out of money for vital imports; prices of essential commodities have skyrocketed and there are acute shortages in fuel, medicines and electricity supply.