‘A group with vested interests may have carried out the crime to disrupt communal harmony,’ police said. 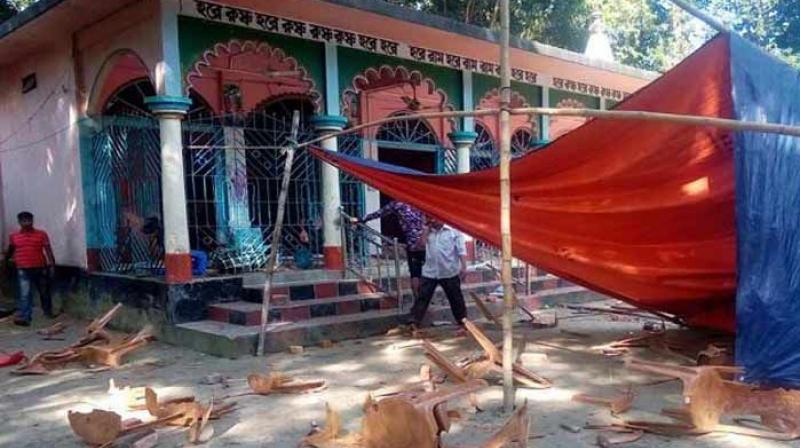 A Hindu temple was vandalised and three idols of deities were destroyed by some unknown people in Bangladesh. (Photo: AFP/Representational)

Dhaka: A Hindu temple was vandalised and three idols of deities were destroyed by some unknown people in Bangladesh's northern Netrokona area, triggering panic among the minority community in the Muslim-majority nation.

The incident came to light after locals of Mymensinghorohi village in Shingherbangla union under the Netrokona sadar upazila found the temple doors open this morning.

Upon entering the temple premises, they found smashed bits and pieces of the temple architecture and three idols. They also saw two of the idols one of deity Kali and another of Shiva about 600 feet away from the temple, Dhaka Tribune reported.

Immediately, police was informed after which an investigation was launched.

"We visited the site and have collected evidence of the vandalism. We have started the investigation and have found that the temple doors were not locked. We are looking for the people who are behind this heinous act," Netrokona sadar police Officer-in-Charge (OC) Shahnur-e-Alam said.

Netrokona Additional District Magistrate Abdul Matin visited the site and said the responsible parties will be identified and punished accordingly.

"We are treating the case with priority. A group with vested interests may have carried out the crime to disrupt communal harmony," the SP added.