The port in Iran's Sistan-Balochistan province on the energy-rich nation's southern coast is easily accessible from India's western coast. 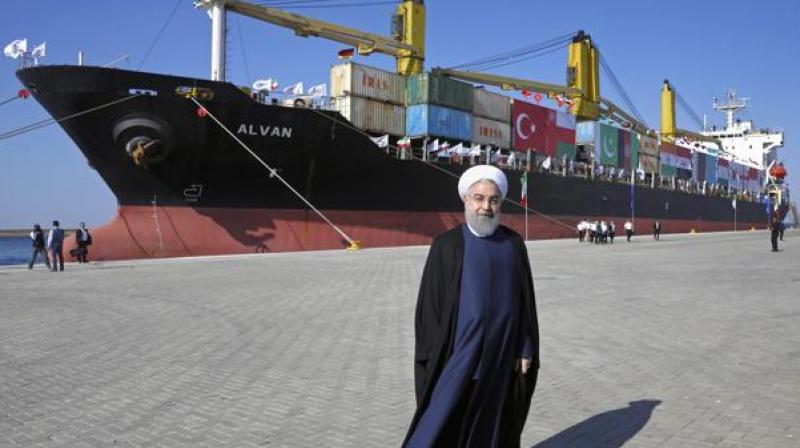 The first phase of the Chabahar port on the Gulf of Oman coast was inaugurated Sunday by Iranian President Hassan Rouhani. (Photo: AFP)

Beijing: China Monday hoped that the launch of the strategic Chabahar port in Iran which enables India to directly trade with Afghanistan besides rivalling Pakistan's Gwadar port is conducive to regional peace and stability.

The first phase of the Chabahar port on the Gulf of Oman coast was inaugurated Sunday by Iranian President Hassan Rouhani, opening a new strategic route connecting Iran, India and Afghanistan while bypassing Pakistan, and reflecting growing convergence of interests among the three countries.

The port in Iran's Sistan-Balochistan province on the energy-rich nation's southern coast is easily accessible from India's western coast and is increasingly seen as a counter to Pakistan's Gwadar port, which is being developed with Chinese investment and is located around 80 kms from Chabahar.

Asked how China views the launch of the project, considering that China is investing heavily in Gwadar as part of the USD 50 billion China-Pakistan Economic Corridor, foreign ministry spokesman Geng Shuang declined to comment on it directly.

"As for the (Chabahar) port, I want to give you a principled answer. We welcome the development of friendly relations between the regional countries and conduct mutually beneficial cooperation," he said.

"We hope the relevant cooperation can be conducive to maintaining regional peace and promoting regional stability and prosperity," he said.

The Chabahar port is being considered a gateway to golden opportunities for trade by India, Iran and Afghanistan with central Asian countries besides ramping up trade among the three countries in the wake of Pakistan denying transit access to New Delhi.