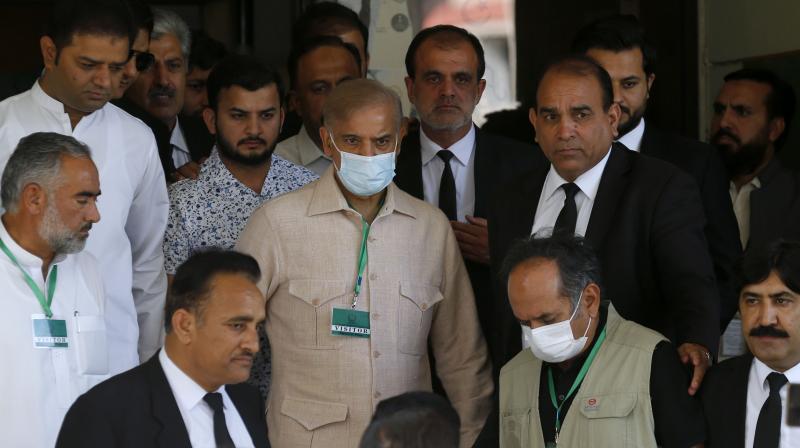 Islamabad: Pakistan's election commission has expressed its inability to hold general elections within three months due to legal, constitutional and logistical challenges, according to a media report on Tuesday.

Pakistan's embattled Prime Minister Imran Khan stunned the Opposition on Sunday by recommending snap elections within three months, minutes after a no-confidence motion against him was dismissed by the deputy speaker of the National Assembly.

Khan then got Pakistan President Arif Alvi to dissolve the 342-member National Assembly.

Pakistan's Supreme Court on Monday adjourned the hearing on the deputy speaker's decision to reject the no-confidence motion against Prime Minister Khan, who had lost majority in the lower house of Parliament.

According to the Dawn newspaper, a senior official of the Election Commission said due to fresh delimitation of constituencies, particularly in Khyber Pakhtunkhwa where the number of seats was increased under the 26th Amend­ment, and bringing district-and constituency-wise electoral rolls in conformity were the major challenges, the preparations for the general elections would require some six months.

Delimitation is a time-consuming exercise where the law provides for one month's time just to invite objections, the report said quoting the official.

The official said procurement of election material, arrangement for ballot papers and appointment and training of polling staff were among the other inherent challenges.

He said that under the law, ballot papers with watermark were to be used which were not available in the country and hence they would have to be imported, and revealed that the top election body had proposed to amend the law to provide for ballot papers with security features', instead of water mark', the report said.

The official said inviting bids and scrutinising financial and technical quotations would also require some time. About the election material, he said some two million stamp pads would be required for around 100,000 polling stations.

Referring to the legal hurdles, the official said that under Section 14 of the Elections Act, the Election Commission was poised to announce an election plan four months prior to the polls.

He said the law requiring use of EVMs (electronic voting machines) and giving overseas Pakistanis voting rights also held the field and had to be repealed.

The official said the commission had already announced the schedule for local government (LG) elections in Balochistan, setting May 29 as the polling day, while the process was also under way to hold LG polls in Punjab, Sindh and Islamabad.

We will have to drop the plan for LG polls, if general elections are to be conducted, he explained.

Meanwhile, expressing grave concern over the recent political developments and ensuing constitutional crisis, the Free and Fair Election Network (Fafen), an independent non-government body, has identified multiple constitutional, legal and operational challenges to the conduct of an early election.

While the constitutionality of the measures leading to the dissolution of the National Assembly will be decided by the Supreme Court, Fafen hopes for a prompt decision by the apex court, which rightly took up the matter suo moto, as any delay will continue to accrue collateral issues arising out of the constitutional deadlock.

Public confusion and political divisions that have already arisen as a result can potentially translate into violent expression. Political parties have a great responsibility to manage their workers and make sure that political disagreements do not turn into violence, especially ahead of an early election, Fafen said in a statement issued on Monday.

According to the organisation, an early election may not be a smooth process in view of several constitutional and legal complications.

The critical factor for the legitimacy of any election will be the completion of the Election Commission, it said, pointing out that the ECP members from Punjab and KP were yet to be appointed.

The constitutional procedure for appointment of the members under a caretaker set-up remains unclear under Article 213 (2B), which requires the prime minister and the opposition leader to initiate the process in a specially formed committee comprising only senators.

Another concern is the constitutional and legal status of the current delimitation of seats of the national and provincial assemblies since it was carried out on the basis of provisional results of the 2017 census.

Similarly, confusion continues to shroud the practicality and enforcement of the recent amendments to the Elections Act, 2017, pertaining to the use of EVMs and the facilitation of overseas Pakistanis to vote in their country of residence, which were passed by a joint sitting of parliament without the support of the opposition parties.

Fafen said it had always urged the need for electoral reforms through political consensus as majoritarian changes to the election law always led to challenges to the legitimacy of the election outcome and political stability, the report said.

The under-registration of women on the electoral rolls is also one of the major issues that the ECP had started to successfully address through targeted campaigns.

While the ECP has been able to arrest the rising gender gap on the electoral rolls, there still are 11.37 million women who remain unregistered as voters.

In case the elections are called within three months, the electoral rolls will have to be frozen 30 days before the announcement of the election programme as per Section 39 of the Elections Act, thereby rendering millions of women voters disenfranchised.

Another challenge is recruiting and training around one million polling staff, printing, publishing and transportation of election materials as well as selection of locations for more than 10,000 polling stations that are to be established due to the addition of more than 15 million voters on the electoral rolls since the 2018 general elections, the report added.