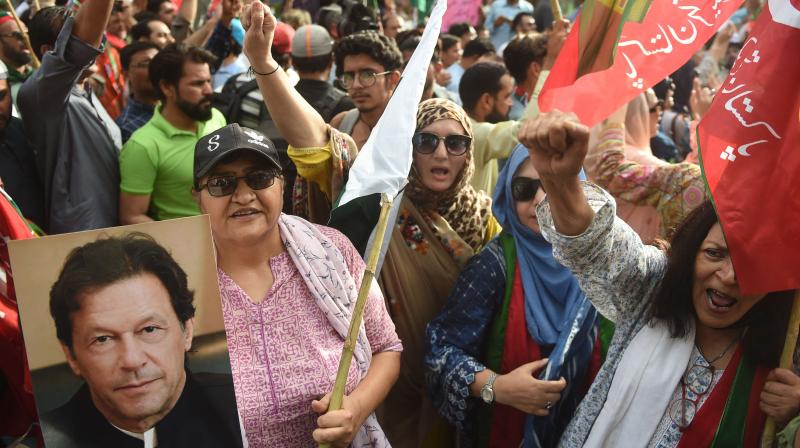 Supporters of Pakistan's ousted prime minister Imran Khan, take part in an anti-government demonstration to a protest against the inflation and fuel price hike in Karachi on June 3, 2022. (Photo by Rizwan TABASSUM / AFP)

Islamabad: Amid rumours of a plot being hatched to assassinate former Pakistan Prime Minister Imran Khan, the Islamabad police department said on Saturday night that the security agencies have been put on high alert in adjoining areas of Bani Gala in the city.

Section 144 has already been imposed in Islamabad and gatherings have been banned, the Islamabad police spokesperson said on Saturday.

"In view of the expected arrival of Pakistan Tehreek-e-Insaf (PTI) Chairman Imran Khan in Bani Gala, which is a residential area located in Islamabad, security in the area has been beefed up and a high alert has been sounded. However, until now Islamabad Police has not received any confirmed news of return from Imran Khan's team," Islamabad Police tweeted.

"Security Division has deployed dedicated security in Bani Gala. A list of people in Bani Gala has not been provided yet to Police. Section 144 is imposed in Islamabad and any congregation is not allowed as per orders of District Magistrate," it said.

"Islamabad Police will provide complete security to Imran Khan as per the law and reciprocal cooperation is expected from Security teams of Imran Khan as well," the police added.

Hassaan Niazi, nephew of Imran Khan said that if anything happens to the Pakistan Tehreek-e-Insaf (PTI) chief, the act will be treated as an attack on Pakistan.

"Anything happens to our leader Imran Khan, will be treated as attack on Pakistan. Response will aggressive - the Handlers will also regret," Hassaan Niazi, nephew of Imran Khan said.

In April, Chaudhary had said that the securities agencies of the country have reported a 'plot' for the assassination of Pakistan Prime Minister Imran Khan.

"After these reports, the prime minister's security has been beefed up as per the government's decision," he was quoted as saying by the Pakistan newspaper Dawn.

The Pakistan Tehreek-e-Insaf leader Faisal Vawda also made similar claims that there was a conspiracy developed to assassinate the Pakistani PM over his refusal to "sell the country".

While responding to the conspiracy to assassinate the premier was mentioned in the letter, Vawda said that there was a threat to the Pakistan PM's life but remained evasive.

He further said that Khan was advised to use bulletproof glasses during his rally at Islamabad's Parade ground. "But as always and as usual, he said my [death] will come when Allah wills. Don't worry about it," Vawda was quoted as saying by Dawn.

This news comes a day after the Pakistan PM Shehbaz Sharif said that a foreign nation sent a message that he needs "to be removed" or Pakistan will face consequences.