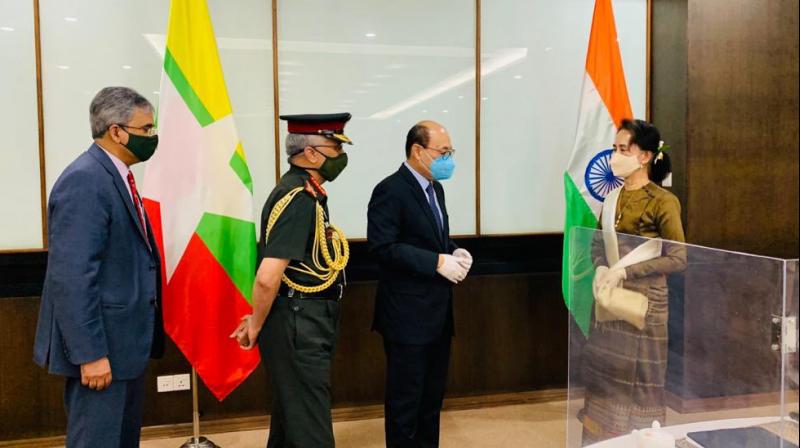 Gen. Naravane and Shringla are on a two-day visit from Sunday to Myanmar with an aim to further expand ties in a range of areas including connectivity, defence and security.

The Indian Army chief and the Foreign Secretary along with Ambassador of India to Myanmar, Saurabh Kumar, called on Suu Kyi at Naypyitaw on Monday during which they discussed important bilateral issues, the Indian embassy tweeted.

"As part of India's contribution to help a friendly neighbour Myanmar fight against COVID-19", General Naravane and Shringla handed over 3,000 vials of Remdesivir to Suu Kyi, it said in another tweet.

The intravenous antiviral drug, Remdesivir, is used to treat COVID-19. US President Donald Trump, who tested positive for COVID-19 last week, is also being administered Remdesivir.

The visit by Gen. Naravane and Shringla to Myanmar assumes significance as it comes in the midst of the Indian Army's bitter border standoff with the Chinese military in eastern Ladakh as well restrictions on foreign visits due to the coronavirus pandemic.

It is Gen. Naravane's first visit to any foreign country after he took charge as the Chief of Army Staff on December 31 last year.

Myanmar is one of India's strategic neighbours and shares a 1,640-km-long border with a number of northeastern states including militancy-hit Nagaland and Manipur.

The visit by Gen. Naravane and Shringla came four days after the two countries carried out a detailed review of their ties in a wide range of areas at a virtual meeting held under the framework of India-Myanmar foreign office consultations.

In the meeting, Shringla said India and Myanmar are working towards operationalising the Sittwe Port by the first quarter of next year and that the tendering process for 69 bridges proposed under the ambitious India-Myanmar-Thailand trilateral highway will begin soon.

Sittwe Port is part of the Kaladan multi-modal transit transport project which is being viewed as India's gateway to Southeast Asia. The port will connect India's landlocked northeastern region with the Bay of Bengal through Mizoram.

In his remarks, Shringla also said that Myanmar's handing over of 22 Indian insurgents has been deeply appreciated by India and sends a strong message of "deterrence to inimical elements on both sides."

India has been concerned over some militant groups from the North-East region taking shelter in Myanmar. The country has been assuring India that it would not allow any insurgent group to use its territory against India.

In June, 2015 the Indian Army had carried out an operation in areas near the Indo-Myanmar against the NSCN (K) militants, days after the ultras had killed 18 Army men in Manipur.

The two countries have significantly ramped up defence and security cooperation in the last few years including in the maritime security sphere.

India has been assisting Myanmar in developing border areas under an agreement inked in 2012 that provided for granting USD 5 million each year over a period of five years. This MoU has already been extended till 2022.

India's development cooperation in Myanmar is estimated at USD 1.4 billion.

The two countries are also expanding partnership in the area of energy cooperation.

With investments of over USD 1.2 billion, Myanmar has the highest Indian investment in any country in South Asia, a source said.

Recently, India approved an investment of over USD 120 million in the Shwe Oil and Gas project. PTI AKJ SCY 10051301 NNNN