21 months on, thousands are enduring another harsh winter in temporary shelters. 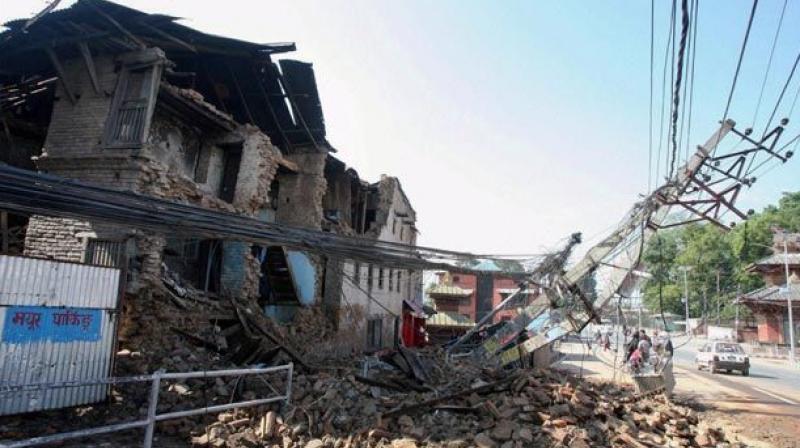 Nearly 9,000 people were killed and over half a million homes were destroyed by the quake in April 2015. (Photo: AP/ File)

Bhaktapur, Nepal: Victims of Nepal's 2015 earthquake are at risk of slipping into debt as they face a second winter in temporary shelters, according to a monitoring group which says the government has been too slow to disperse reconstruction grants.

Nearly 9,000 people were killed and over half a million homes were destroyed by the quake in April 2015.

But 21 months on, thousands are enduring another harsh winter in temporary shelters, with an increasing number now being forced to take out loans to rebuild their homes.

"There is a movement towards what we call a debt trap because people who have not been able to get on with their livelihood, with rebuilding homes or with income generation, have borrowed against future earnings," said George Varughese, the Asia Foundation's Nepal director.

Borrowing has more than doubled since the quake, with those in poorer districts often turning to money lenders who charge high interest rates, a survey by the group found.

"What we have seen in other countries is that if you don't address a future debt crisis now, it will be too late to get them out of it later. One thing (that can be addressed) is ensuring that cash and credit are readily available. That's still not the case," Varughese said.

Donors pledged $4.1 billion after the earthquake -- the strongest to hit the impoverished Himalayan nation in 80 years.

But political wrangling over control of the funds and formation of the government body to oversee the reconstruction effort meant the first instalments of a housing grant were only paid out in March 2016.

But the NRA has not yet finalised the list of those eligible for payouts and more than 200,000 people have complained of their names being omitted.

Sukuram Khayaju, a mason in the town of Bhaktapur in the Kathmandu Valley, recently borrowed 500,000 rupees from a local cooperative to rebuild his home.

"How long could we wait?" Khayaju said. "Everyone here has taken out loans. It is difficult to eat, how can we build houses?"

Nepal's central bank has offered families loans at a subsidised interest rate of two percent, but only about 100 people have taken up the scheme, which has been criticised for being needlessly bureaucratic.

The NRA hopes to begin payments of the second tranche of the housing grant soon but has repeatedly missed deadlines for agreements with victims.

"We are making progress said.