Chief Justice took suo motu notice of the alleged torture of the maid by a judge and his wife in Islamabad. 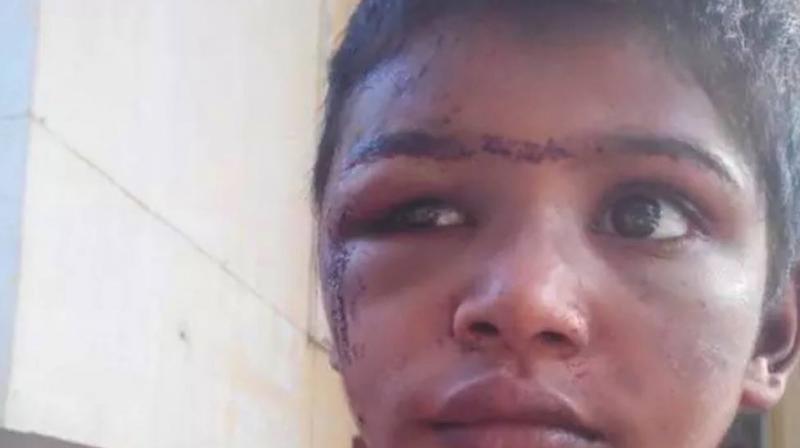 The child who was tortured in confinement by her employers (Photo: Facebook)

Islamabad: Pakistan's Supreme Court on Friday ordered police to trace a 10-year-old girl, who was allegedly tortured while working as a maid for an influential district judge, besides a detailed probe into the matter.

Chief Justice Mian Saqib Nisar on Wednesday took suo motu notice of the alleged torture of the maid by a judge and his wife in Islamabad after disturbing photos of her appeared on social media last week, showing her badly beaten and bruised.

The police took the girl into custody after recovering her from the house of the judge and was placed into a women's shelter, reports said, adding that the girl's parents later took her from there and disappeared with her.

During Friday's hearing, two women appeared claiming to be mothers of the victim, following which the Supreme Court ordered DNA test to ascertain the parentage.

The case took another twist on Tuesday after father of the girl told a local court that there was no truth of torture and that he reached at a private settlement with the judge.

The Chief Justice, who is heading a two-member bench hearing the suo motu case, remarked, "No 'agreements' can be reached in matters concerning fundamental human rights."

"Even parents cannot deny children their fundamental rights," the judge observed. "How did they reach a settlement on torture against the child?"

He ordered Deputy Inspector General police today to probe the case and present the victim during the hearing next week, according to a court official.

He also ordered the court would exercise parental jurisdiction in the case and rejected the pardon given by the victim's father to Additional District and Sessions Judge Raja Khurram Ali Khan and his wife.

In the First Information Report registered with Islamabad police, the girl said she had been working at the Khan's house for nearly two years.

Initially, the girl told police that she was often beaten up in the house. Most recently, she alleged that 'Mano Baji', judge's wife, shoved her hands onto a burning stove and then beat her after a broom went missing.

She also claimed the owners of the house would usually lock her up in a storeroom at night besides starving and beating her up.