A special team of Nepal Police arrested Samshul Hoda along with three others. 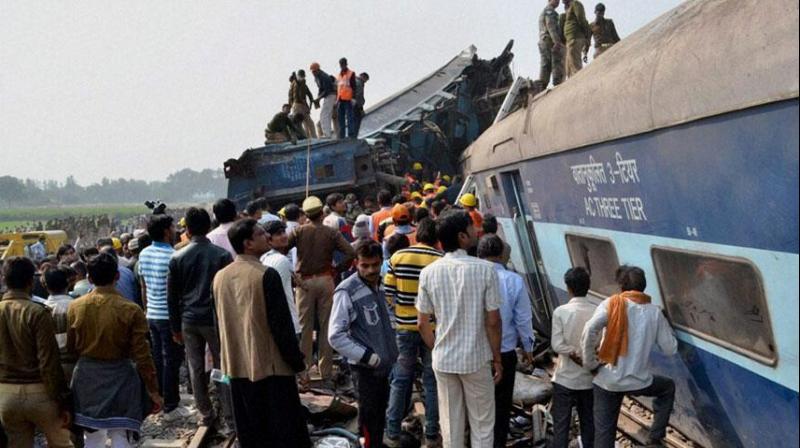 One of the key suspects in the Kanpur train derailment in November has been arrested in Nepal. (Photo:PTI)

Kathmandu: Nepalese national Samshul Hoda, an alleged ISI agent and the prime suspect in the November Kanpur train tragedy, has been arrested here after being deported from Dubai, police said on Tuesday.

Hoda, 48, was arrested by a special team of Nepal Police along with three others.

He has been arrested at the Tribhuvan International Airport on Monday, said Deputy Inspector General of Police (DIG) Pashupati Upadhyaya.

The police have brought Hoda and three other criminals to Nepal from Dubai in coordination with the Interpol, Upadhyaya told PTI.

"We have heard that Hoda is wanted in a railway accident that took place in Kanpur last year killing 150 people," Upadhyaya said.

The three others arrested persons have been identified as Brij Kishor Giri, Ashish Singh and Umesh Kumar Kurmi, all from Kalaiya district in southern Nepal.  They were arrested for their alleged involvement in the December 25 murder of Indian nationals Arun Ram and Dipak Ram in Bara district.

Hoda is the mastermind of the twin murder, the police said.

Hoda has links with international criminal groups and he has been involved in a number of criminal activities in Nepal and India, Upadhyaya said.

A case has already been registered against him in Bara District Court, he added.

The role of ISI is being suspected in the incident after Bihar police in January arrested three persons claiming that they were working for the Pakistani intelligence agency to target Indian Railways.

According to Bihar police, the three were paid Rs 3 lakh by a Nepali man who had connections with Hoda, who is accused of acting as an agent of Pakistan's spy agency ISI to execute the Kanpur sabotage plot on November 20 last year.