The exclusion of a group will not lead to implementation of peace agreement and that it is fraught with the risk of hostilities, says Lavrov 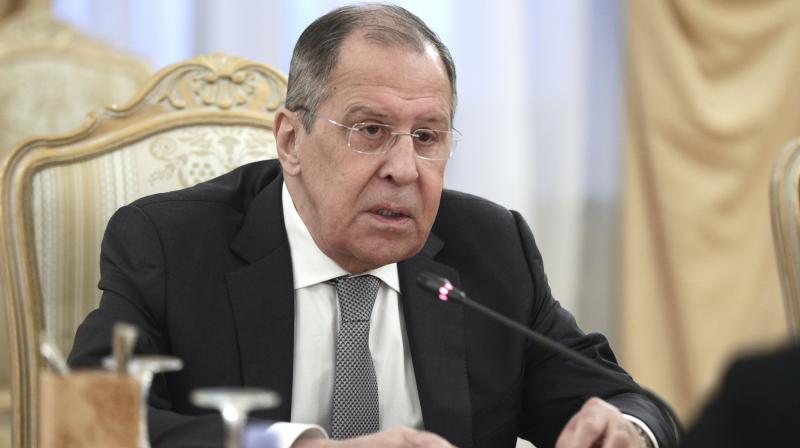 The Russian foreign minister said both his country and India had agreed to keep in close touch on the situation in the strife-torn nation, pointing to the contributions that neighbours and old powerful actors in the region can make in the Afghan peace process. — AP

New Delhi: Batting unabashedly for the need to have the Taliban as part of the peace process in Afghanistan, Russia on Tuesday termed it a “movement that is part of Afghan society”. In remarks that raised eyebrows at a joint press conference in the presence of external affairs minister S. Jaishankar after detailed bilateral talks with him, Russian foreign minister Sergey Lavrov said the participation of all Afghan political groups was necessary in the peace talks “otherwise, it is not going to be stable”. A concerned and apprehensive New Delhi meanwhile told Moscow that “for India, what happens in Afghanistan impacts its security directly”, and that “the (Afghan) peace process must be based on foundational principles to which we all subscribe”, adding that a “political solution should mean an independent, sovereign, united and democratic Afghanistan”.

But in a clear indication of a “tilt” towards the Taliban, an unfazed Mr Lavrov told reporters that the “exclusion of a group” will “not lead to implementation” of a peace agreement and that it is “fraught with the risk of hostilities”. He said it “would be sad” if the Afghan peace process “breaks down”. The Russian stand and perceived softness towards the Taliban is seen by observers as further evidence of the newfound proximity between Russia and Pakistan, that is seen as the main backer of the Taliban. Mr Lavrov also left for Islamabad Tuesday evening, where the Afghan peace process will no doubt be further discussed by him.

The Russian foreign minister said both his country and India had agreed to keep in “close touch” on the situation in the strife-torn nation, pointing to the contributions that “neighbours and old powerful actors” in the region can make in the Afghan peace process. He also referred to the “Moscow format” in this regard, a reference to recent Afghan peace talks in the Russian capital that had involved the Taliban.

Mr Jaishankar meanwhile said: “One question on which we spent some time is the unfolding developments in and around Afghanistan. As you all know, the Heart of Asia-Istanbul Process conference took place last week ... (in Dushanbe). There have been other discussions of a bilateral or plurilateral nature as well. Many more can be expected in the coming days. For India, what happens in Afghanistan impacts its security directly. I shared our approach that a durable peace there would require harmonising interests of all, both within and around that country. The peace process must be based on foundational principles to which we all subscribe. And a political solution should mean an independent, sovereign, united and democratic Afghanistan.”

It may be recalled that India is strongly backing Afghan President Ashraf Ghani, who is hated by the Taliban. Mr Jaishankar had only recently “reassured Afghan foreign minister Haneef Atmar of India’s long-term commitment towards a peaceful, sovereign, stable and inclusive Afghanistan where the rights of all sections of the society are protected within a democratic constitutional framework”.

It may be recalled that in February, Prime Minister Narendra Modi had expressed concern over the increasing violence in the war-torn nation and had called for a ceasefire and an immediate end to violence in Afghanistan. Mr Modi had reiterated New Delhi’s stand in favour of a peace process that is Afghan-led, Afghan-owned and Afghan-controlled, while pointing out how innocent citizens, journalists and activists are being targeted in a cowardly manner in the strife-torn nation, even as a desperate Taliban continues to mount deadly terror attacks in that country against its targets including women.

It may also be recalled that recently, while seeking a role for India as well apart from a host of other countries in the Afghan peace process, the United States under the Joe Biden administration had proposed a “UN-led peace conference in Turkey attended by foreign ministers and envoys from Russia, China, Pakistan, Iran, India and the US”.

India, which has already successfully carried out several development projects in Afghanistan, had in February announced that it would build a second dam there -- the Lalandar (Shatoot) Dam -- to meet the drinking water needs of Afghan capital Kabul. This is the second major dam being built by India in Afghanistan, after the India-Afghanistan Friendship Dam (Salma Dam), which was inaugurated in 2016.