'The no pay raise decision is also only for the officers and not for the soldiers,' Bajwa said in a statement. 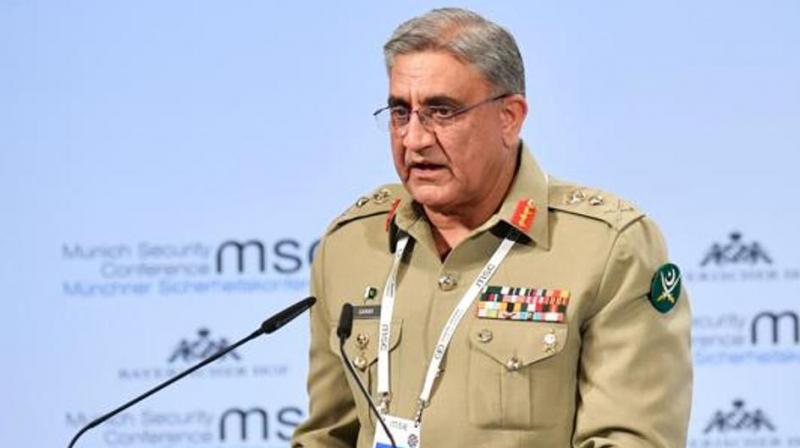 Bajwa who spent Eid-ul-Fitr with troops along the Line of Control (LoC) said the best Eid for a soldier is to have pride for being on duty of defending the motherland even on such festive days away from the family. (Photo: File)

Islamabad: The Pakistan Army's move to slash its defence budget for one year will not impact the military's "response potential" to all types of threat, Army chief General Qamar Javed Bajwa has asserted as he celebrated Eid-ul-Fitr with soldiers posted along the LoC with India.

Pakistan's military, in a rare move, decided to voluntarily cut the defence budget for the next fiscal year amid an austerity drive launched by the government to solve the cash-strapped nation's financial woes.

Commenting for the first time on the unprecedented move by the powerful military, Chief of Army Staff General Bajwa on Wednesday assured the nation that there would be no impact to the military's "response potential" due to the voluntary cut in the defence budget.

Bajwa who spent Eid-ul-Fitr with troops along the Line of Control (LoC) said the best Eid for a soldier is to have pride for being on duty of defending the motherland even on such festive days away from the family.

"For defenders of Pakistan, our first family is the Pakistani nation, then the ones back home," he said while giving a pep talk to the troops.

Speaking on the voluntary decision to forego even the routine increase in the annual defence budget, the army chief said, "This initiative is not a favour to the nation as we are one through thick and thin."

"Irrespective of the voluntary cut in defence budget coming financial year (FY), there shall be no impact on our response potential to all types of threat and quality of life of the soldiers.

"The no pay raise decision is also only for the officers and not for the soldiers," Bajwa said in a statement.

He said the Pakistan Army will manage the shortfall during the financial year by "tightening our belt".

Pakistan in 2018 was the 20th biggest military spender in the world with an expenditure of USD 11.4 billion, a report published by the Stockholm International Peace Research Institute said in April.

His cash-strapped government has negotiated a USD 6 billion bailout package from the International Monetary Fund to overcome the financial woes facing the country.

Khan said he was grateful for the move that came "despite multiple security challenges" that Pakistan faces.

He added that the funds saved will be used for the development of the newly-merged tribal areas as well as in Balochistan.

Meanwhile, the Director General Inter Services Public Relations (ISPR) Major General Asif Ghafoor tweeted on Wednesday that voluntary cuts in the defence budget for a year would not be at the cost of defence and security.

"We shall maintain effective response potential to all threats. Three services will manage impact of the cut through appropriate internal measures.

In another tweet on Wednesday, he criticised the Indian media reaction to the Pakistani military's gesture.

"Indian fake media busy spinning on our internal def budgeting choice. Don't forget, we were the same forces with same budget on 27 Feb 19. We have the capability & capacity to respond. Remember, it's not budgeting, it's resolve of force & the nation firmly standing behind its forces," the military spokesman tweeted.

He was apparently referring to the tensions between India and Pakistan which worsened after a Jaish-e-Mohammed (JeM) suicide bomber attacked a CRPF convoy in Pulwama in February.

Following the terror attack, Indian fighter jets struck a terrorist training camp of the JeM in Pakistan's Balakot on February 26. Pakistan carried out a counter-offensive the next day and downed a MiG-21 in an aerial combat and captured an IAF pilot, who was later handed over to India.