India including tri-junction in Sikkim standoff due to ulterior motives: China 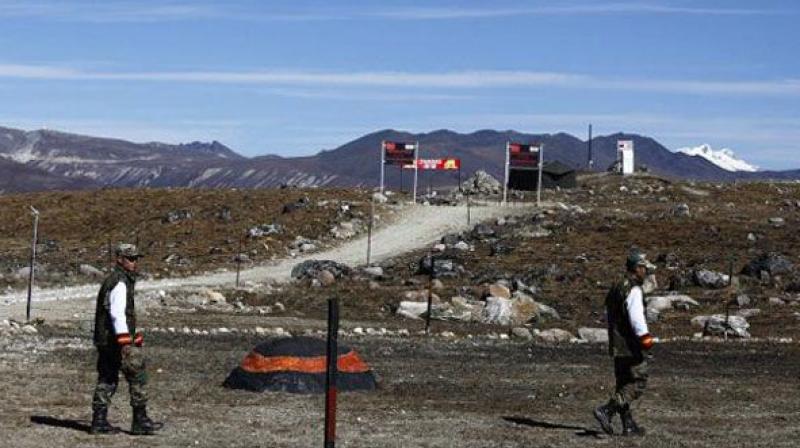 The Indian troops intervened on June 16 on behalf of Bhutan to stop the road construction by the Chinese. (Photo: PTI/File)

Beijing: China said on Friday that "ulterior motives" prompted India to include the tri-junction with Bhutan in the Sikkim standoff and asserted that New Delhi's acceptance of the 1890 Sino-British treaty on the boundaries in the area should not change with the passage of time.

"The so-called tri-junction point as the name implies is a point instead of a line or an area," Chinese Foreign Ministry spokesman Geng Shuang told a media briefing here.

Asked about India's assertion that China is violating the agreement reached by the Special Representatives on the boundary in 2012 over the tri-junction, Geng said the road being built by China has nothing to do with it.

Geng said the convention between Great Britain and China relating to Sikkim in 1890 stated that the Sikkim section of the boundary commences from the east of Mount Gipmochi.

Read: ‘Back off before China readjusts Sikkim stance’

"The illegal trespass by the Indian troops took place at the Sikkim section of the India-China boundary, 2,000 metres away from the Mount Gipmochi," he said.

The Chinese Foreign Ministry spokesperson asserted that that the issue has "nothing to do with tri-junction point" and China had not breached the 2012 agreement.

Asked to provide exact coordinates of the tri-junction, he said he had no information on it. Geng also sought to justify China's road building, saying that it is not part of the Doklam area.

Geng questioned India's stand that Doklam is part of the strategic tri-junction also known as the Chicken's Neck, which is the key corridor connecting India with its north-eastern states.

"In disregard of the boundary convention, the Indian side takes entire Doklam area as part of the tri-junction. That is out of ulterior motives," Geng said.

"The Indian side introduced the idea of the tri-junction point into the incident in an attempt to enlarge the point into an area that is absurd and has ulterior motives," he claimed.

He also sought to dismiss the perception that the 1962 India-China war changed the past alignment of the boundary as China occupied areas like Aksai Chin, which continues to be in its possession.

The Indian troops intervened on June 16 on behalf of Bhutan to stop the road construction by the Chinese.

China and India have been engaged in the standoff in the Doklam area near the Bhutan tri-junction for the past three weeks after a Chinese Army's construction party attempted to build a road.

Geng's remarks come days after the Ministry of External Affairs (MEA), in a statement, had asserted that India had underlined that the two governments had in 2012 reached an agreement that tri-junction boundary points among India, China and third countries would be finalised in consultation with the countries concerned.

"Any attempt, therefore, to unilaterally determine tri-junction points is in violation of this understanding," it had said.

India argues that since it is a tri-junction involving the three countries, it also has a say in the issue, specially in the backdrop of 2012 agreement between Special Representatives of the two countries, that have till now held 19 rounds of talks.

Bhutan, which does not have diplomatic ties with China, deals with Beijing through its Embassy in New Delhi.

As a close friend and neighbour, Bhutan enjoys diplomatic and military support from India. Geng asserted that there was no breach or violation from the Chinese side in the incident.

"We always believe that the tri-junction is a point not a line or an area," he said, adding that "equating a point with the areas is an introduction of a new concept."

When asked about the protest lodged by Bhutan over the issue, Geng reiterated that China and Bhutan reached consensus during their 24 rounds of boundary talks.