It has been 12 days since football team consisting of 11 to 16-year-old Thai boys, assistant coach have been trapped in Tham Luang caves. 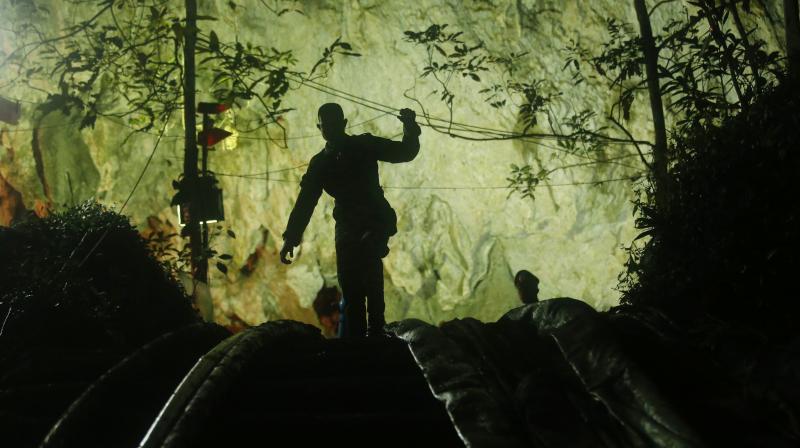 Experts say that they could be trapped in for more than 45 days considering the extent of the rainfall during the monsoon season in Thailand. (Photo: AP)

Mae Sai: Eight years ago, Omar Reygadas, a chilean miner was sealed inside a mine in the Atacama Desert in Chile along with 32 others. They were trapped inside for 69 days.

According to a report in The Washington Post, 64-year-old Reygadas was the 17th miner to be rescued after being lifted out of the 2,300-foot-deep mine- an incident which grabbed the attention of the world. He now sits in the comfort of his home in Chile while he watches experts from all over the world attempting to rescue a football team of 12 boys and their assistant soccer coach from the swamped Tham Luang caves in northern Thailand.

"It's terrible for them - they're little - but I believe that boys with a lot of strength are going to manage to be whole when they get out," Reygadas told The Associated Press. He said that it is tough for him to offer any advice but he persuaded the boys to concentrate on "reuniting with their families."

"They shouldn't be ashamed to be scared," he added. "Because we were scared, too. Our tears also ran. Even as adult men, we cried."

"My advice is to be firm. . . . I want them to know that being scared is normal. We were also scared, we also shed tears."

Another Chilean miner, Mario Sepulveda, known with the nick name "Super Mario" developed through his energetic spokesmanship from his videos, also conveyed his support. "I have no doubt that if the government of this country puts in everything it can . . . this rescue will be successful," he said to Agence France-Presse in a video message. "We are praying for each of you."

It has been 12 days since the football team consisting of 11 to 16-year-old Thai boys along with their assistant coach went to explore a six-mile-long cave when the rising water level trapped them in one of the chambers of the cave complex. The team has now garnered global attention with more than 1,000 people from various nations contributing towards their rescue, and even more that have volunteered to aid, The Washington Post reported. 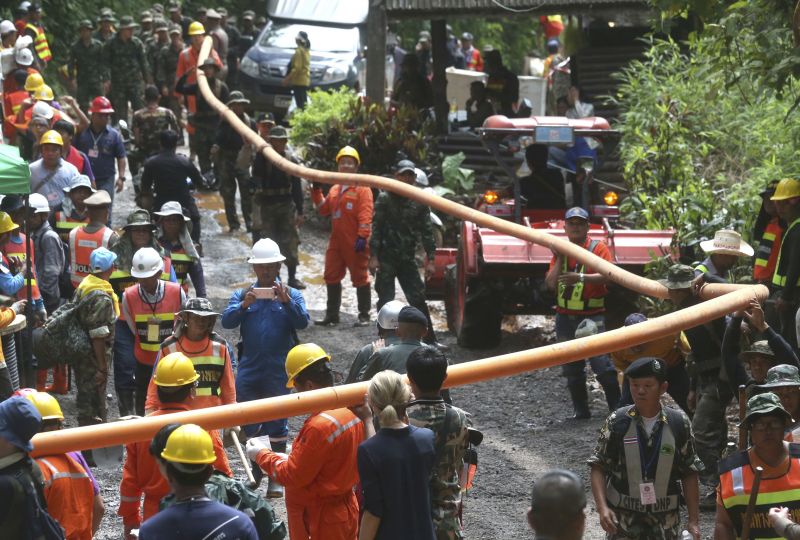 FIFA President Gianni Infantino invited the Wild Boars team to Russia for the World Cup final. "If, as we all hope, they are reunited with their families in the coming days and their health allows them to travel, FIFA would be delighted to invite them to attend the 2018 World Cup final as our guests," he wrote in a letter to the head of the Football Association of Thailand.

Tesla CEO, Elon Musk took to Twitter to express his support for the team by saying that he is "happy to help". He confirmed that engineers from SpaceX and Boring were en route to Mae Sai in northern Thailand to assist the rescue team there. SpaceX engineers spacecraft, while Boring is an infrastructure construction company that "has advanced ground penetrating radar & is pretty good at digging holes," Musk tweeted.

"He may provide services for location tracking, water pumping or battery power," the Thai government posted on Facebook along with an image of Musk's tweet. The government added that the American engineers would arrive on Saturday to aid with the rescue.

On Friday, Elon Musk also said that it would be worth trying to "insert a 1m diameter nylon tube (or shorter set of tubes for most difficult sections) through cave network and inflate with air like a bouncy castle."

At a FIFA event this week, Portuguese soccer star Cristiano Ronaldo told reporters that "the world of football hopes that someone can find a way to take these kids out of there," CNN reported.

The British television host of the survival series "Man vs. Wild," Bear Grylls also tweeted, "So proud of you Jon Volanthen helping orchestrate this rescue - and no surprise you are a Scout volunteer Leader!"-- referring to one of the two British divers who first found the team. "We are here for you if you need any extra help," he added.

Various ideas about how to carry out the rescue are floating around social media with some suggesting the building of a "small capsule" or "mini-submarine". Elon Musk suggested an idea of his own which includes inserting an inflatable tube into the cave that will assist the group in crawling out.

According to The Washington Post, teaching the boys how to dive, pumping water out of the cave and searching alternative entrances are among the various methods that the rescue team on ground is employing to get them out. Thailand's weather forecast for this weekend has developed worries among experts who say that the currents in the cave are too forceful for beginners to risk an escape and that if the boys aren't rescued soon, they may be trapped for months. 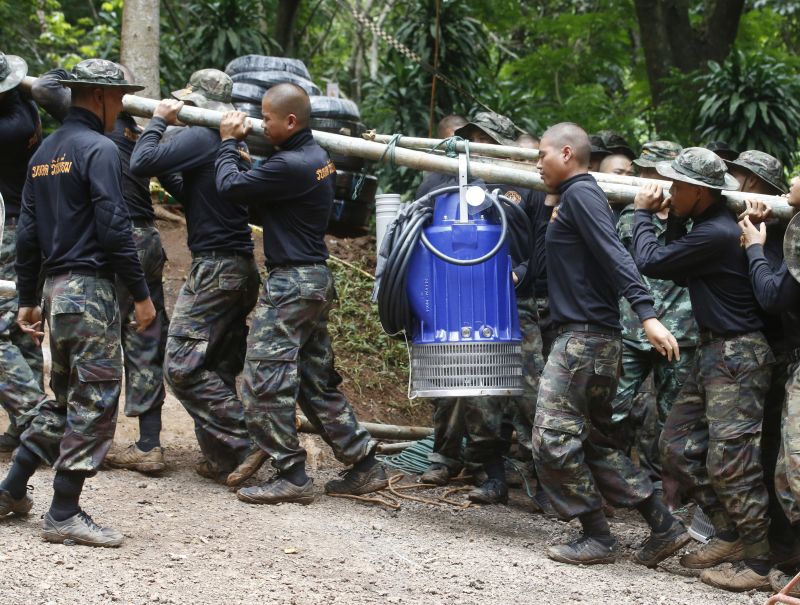 Reygadas told the boys, in his message, to depend on each other for mental aid while a rescue plan is being developed. The head coach of the Wild Boars soccer team, Naparat Guntawong described the 12 boys as top athletes who had bonded closely, reported BBC Southeast Asia correspondent Jonathan Head.

"He was talking about what a tightknit team this is," Head said on the BBC World Service. "He's been training them for five years, and he said they're the top athletes in his group. . . . They've all been very strong-willed, and he's sure that their tight group mentality has probably helped them through this ordeal."

Saman Kunont, a Thai military diver, died due to lack of oxygen while helping in the operation to rescue the boys. The journey out is an exhausting 11-hour round trip even for expert divers.

More than 100 chimneys are being drilled into the mountainside as an alternative towards the rescue mission of the team as the risk in evacuating them by diving out is too high. Experts say that they could be trapped in for more than 45 days considering the extent of the rainfall during the monsoon season in Thailand.

The boys were forund standing on a rock above an expanse of water on the 10th day by rescuers. They were in a weak condition, but with only minor injuries, and were given energy gels to sustain them. 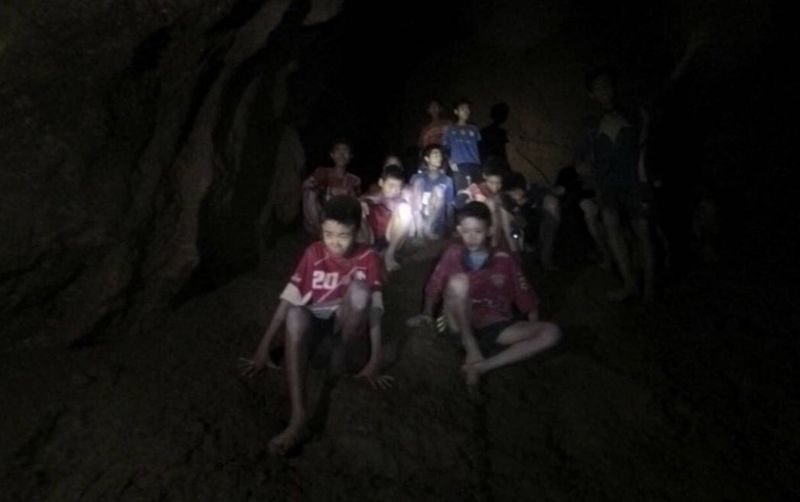