The powerful clan has held sway over the island nation's politics for decades, as well as having a major influence in key state institutions 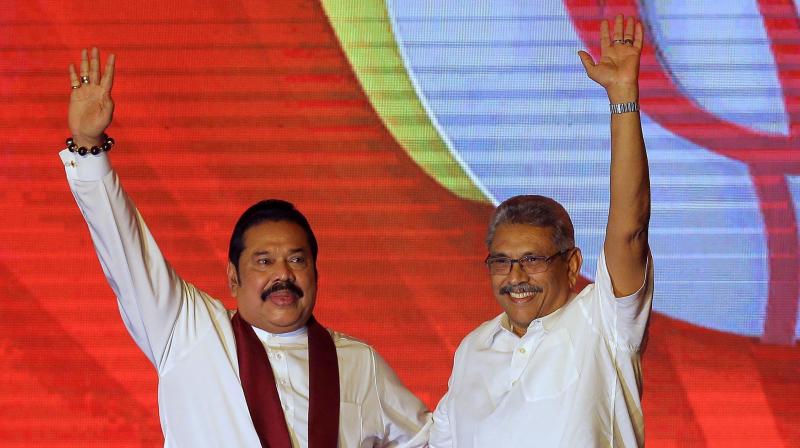 The powerful clan has held sway over the island nation's politics for decades, as well as having a major influence in key state institutions such as the national airline and state corporations.

Here are the key members of the dynasty:

Mahinda Rajapaksa, 74, is the patriarch of the family and served as prime minister in 2004 and then president from 2005 until January 2015.

He was appointed prime minister a second time by his brother Gotabaya in November.

Mahinda is adored by the Sinhala-Buddhist majority for crushing separatist Tamil rebels in May 2009 following a highly controversial military offensive that ended a decades-long civil war.

During his rule Sri Lanka also moved closer to China, borrowing almost $7 billion for infrastructure projects -- many of which turned into white elephants mired in corruption.

Gotabaya Rajapaksa, 71, was the main lieutenant of Mahinda during his reign, holding the influential post of secretary to the ministry of defence with responsibility for day-to-day control of the armed forces and police.

Dubbed "The Terminator" by his own family, he is feared by foes for his short temper.

He has faced several corruption allegations, but his court cases have been frozen or withdrawn as he enjoys immunity after winning the presidency in 2019.

Basil Rajapaksa, 69, is a political strategist who managed the economy under Mahinda.

He was called "Mr. Ten Percent" in a BBC interview in reference to commissions he allegedly took from government contracts.

Subsequent administrations failed to prove any charges he syphoned off millions of dollars from state coffers, but he still faces several prosecutions for corruption and unexplained wealth.

As a dual US-Sri Lankan citizen he was prohibited from standing for elected office but is currently a senior adviser to the government.

Chamal Rajapaksa, 77, was speaker of the Sri Lankan parliament when brother Mahinda was president and is also a former minister of shipping and aviation.

Formerly a police officer, he once served as a personal bodyguard to Sirimavo Bandaranaike, the world's first woman prime minister.

He is expected to continue to serve in the prime minister's cabinet in the new government to be formed after the polls.

Namal Rajapaksa, 34, a lawyer, is the scion of the family dynasty and the eldest son of Mahinda.

During his father's decade in power, Namal was highly influential although he did not hold any portfolio.

The former administration accused him of money laundering and other corruption charges, for which he still faces trial.

He is expected to play a key role in the new government, and observers say Mahinda is grooming him to become a future president.