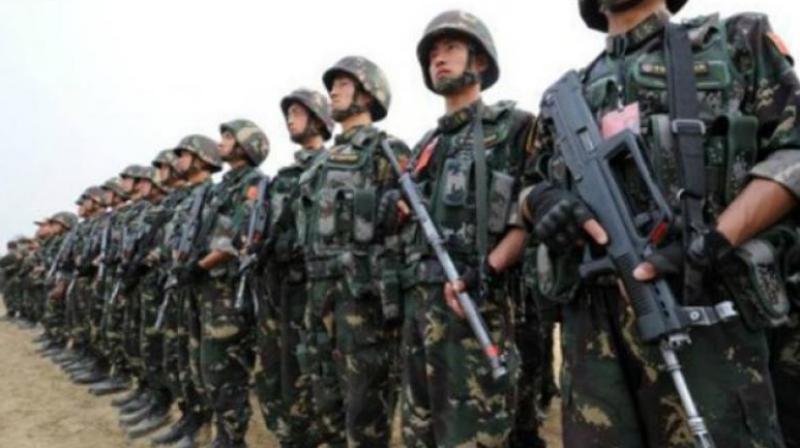 The induction of the mobile howitzers followed the move by the PLA to put into service the light-weight battle tank, which was tested by its military during exercises in Tibet held at the peak of the Doklam standoff. (Representational Image | AFP)

Beijing: After the recent induction of light-weight battle tank in Tibet bordering India, the Chinese military has equipped its troops stationed at the Himalayan plateau with new vehicle-mounted howitzers to improve their combat capability, official media in Beijing reported on Tuesday.

It quoted Chinese military analysts as saying that the new equipment would be the PLC-181 vehicle mounted howitzer. The announcement was made in an article released by the WeChat account of the PLA Ground Force on Saturday, the report said.

The equipment was used in an artillery brigade in Tibet during the 2017 China-India stand-off at Doklam, it said.

Song Zhongping, a military expert and TV commentator, told Global Times that the howitzer has 52-caliber cannon with a range of over 50 kms and shoots laser-guided and satellite-guided projectiles. It will boost the high-altitude combat capability of the PLA in Tibet, Song said.

The induction of the mobile howitzers followed the move by the PLA to put into service the light weight battle tank, which was tested by its military during exercises in Tibet held at the peak of the Doklam standoff.

The Type 15 has an engine capable of 1,000 horsepower and is significantly lighter than the PLA's other main battle tanks in service, weighing about 32 to 35 tonnes. The tank meant for rugged and mountainous terrain of the Himalayan region.

The induction of the tank and the mobile howitzers highlighted the PLA's efforts to reinforce its troops with new equipment despite steady normalisation of military relations since last year.

As part of the military training in 2019, an artillery brigade in the Tibet Military Command ordered soldiers to take part in a military skills competition at a training ground on the Qinghai-Tibet Plateau 3,700 meters above sea level, the report said.

Last week, President Xi Jinping, who also heads the military, ordered the armed forces to enhance their combat readiness to make sure they are always ready for battle, saying risks and challenges for China are on the rise.

China's border issue has not been completely resolved, and was challenged by pro-Tibet independence forces and terrorists, the report quoted analyst as saying.

Zhao Gancheng, director of the Centre for Asia-Pacific Studies at the Shanghai Institute for International Studies, told the daily that the military investment in Tibet has been rising, but is primarily meant for defence and not to provoke conflict with neighbouring countries.

He said the PLA troops stationed in Tibet need to improve their combat capabilities in plateau areas and strengthen their willpower in extreme weather as they are primarily responsible for the border defence against terrorists and foreign invaders, he said.

To cope with altitude sickness, the PLA built oxygen stations for the soldiers in Tibet in 2015, which were used for medical purposes, but are now also being used in regularly training.