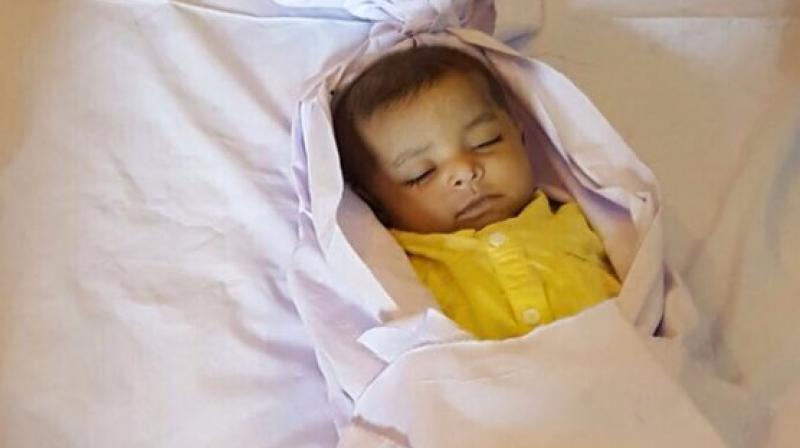 Kanwal had obtained the medical visa, which he had earlier failed to procure due to ongoing India-Pakistan tensions, with the help of Indian External Affairs Minister Sushma Swaraj. (Photo: Twitter)

Lahore: A Pakistani baby, who came to India on a medical visa and underwent a successful heart surgery last month, died of dehydration on Monday night after returning home in Lahore.

My Rohaan passed away last night. He fought & conquered with major heart surgery but slipped and fell in grave due to little dehydration. pic.twitter.com/beI3F88Qz1

@SushmaSwaraj life is fragile, despite all efforts Rohan passed away to a better place. thank u and ppl of india for all efforts. God Bless pic.twitter.com/hQN0Lx710F

Kanwal had obtained the medical visa, which he had earlier failed to procure due to ongoing India-Pakistan tensions, with the help of Indian External Affairs Minister Sushma Swaraj.

Rohaan was brought to India on July 12 and was operated on July 14 by a team of doctors led by Dr Rajesh Sharma, Director of Paediatric Cardiac Surgery Department at Jaypee Hospital in Noida.

Rohaan was suffering from "D- transportation of great arteries with abnormal origin of main arteries from opposite chambers with multiple VSD and severe pulmonary hypertension", the hospital had said.

After Rohaan's surgery, his family had thanked the Indian government and Swaraj for their efforts.

Earlier this year, Rohaan’s father was informed by doctors in Lahore that his son had a hole in his heart. Kanwal had sought Swaraj’s help through Twitter to obtain the medical visa for the treatment of his child.

Why my bud suffers for medical treatment!! Any answers Sir Sartaaj Azeez or Ma'am Sushma?? pic.twitter.com/p0MGk0xYBJ