Pakistan has claimed that Yadav is a commander-rank officer with the Indian Navy. 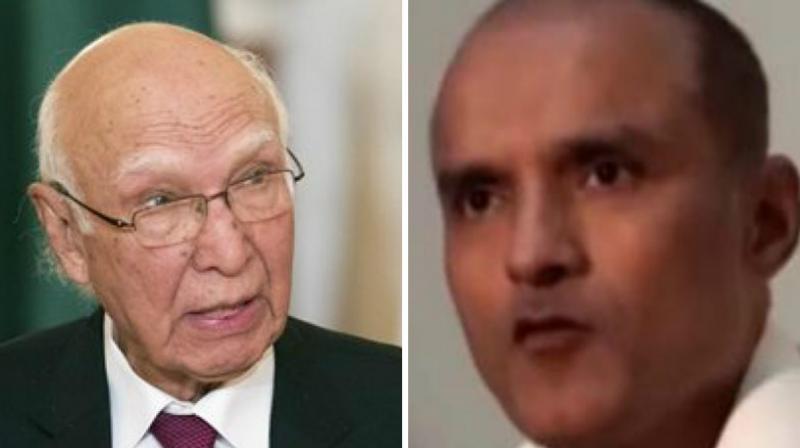 Yadav was arrested by the Pakistan authorities during a raid in Balochistan in March this year. (Photo: PTI/ Videograb)

This comes after reports in the Pakistani media quoted Aziz saying that Islamabad does not have enough or conclusive evidence against Yadav.

"In response to a media query regarding the Adviser to the Prime Minister's statement in the full Senate Chamber pertaining to Kulbhushan Yadav, the arrested Indian Intelligence agency RAW's operative, the Spokesperson said that the statement attributed to the Adviser is absolutely incorrect," said the statement.

It added that Aziz had instead said that the investigations regarding the network of Yadav are ongoing and the dossier shall be completed upon conclusion.

"There is irrefutable proof against Kulbhushan Yadav, who had also made a public confession in March this year," it said adding that, "The Adviser also condemned the continued Indian interference in the internal affairs of Pakistan and urged the international community to take immediate notice."

Yadav was arrested by the Pakistan authorities during a raid in Balochistan in March this year.

According to the Pakistan government, Yadav has admitted that he had been directing various activities in Karachi and Balochistan at the behest of RAW since 2013. He also confessed of playing a role in deteriorating law and order situation in Karachi.

The Indian government, on the other hand, has issued at least five to six note verbales to the Pakistan foreign ministry to get consular access to Yadav, but Islamabad has till now showed no signs of allowing it.

Pakistan has claimed that Yadav is a commander-rank officer with the Indian Navy, while India maintains that he retired from the Navy in 2002 and has had nothing to do with the Indian government when he was arrested from Balochistan.

India has denied that Yadav is a spy and maintains that he is a businessman.