This is the first time that a Chinese official sought to bring in the Kashmir issue even though such a remark has been made by a scholar. 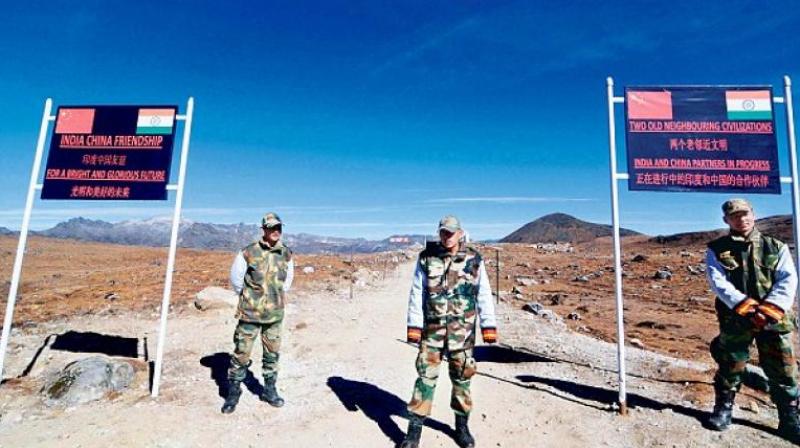 The official also rejected a negotiated solution by restoring status quo with the simultaneous withdrawal of Indian and Chinese troops to their earlier positions. (Photo: Representational/AFP)

Beijing: Rejecting India’s suggestion for a simultaneous withdrawal of troops to end the standoff at Doklam, China on Tuesday upped the ante, wondering what New Delhi would do if it “enters” Kalapani region in Uttarakhand or Kashmir.

India and China have been locked in a face-off in the Doklam area of the Sikkim sector for 50 days after Indian troops stopped the Chinese Army from building a road in the area.

China claimed it was constructing the road within their territory and has been demanding immediate pull-out of the Indian troops from the disputed Doklam plateau. Bhutan says Doklam belongs to it but China claims the area belongs to it and says Thimphu has no dispute with Beijing over it.

“Even if there is only one Indian soldier, even for a day it is still a violation of our sovereignty and territorial integrity,” Wang Wenli, deputy director general of the Boundary and Ocean Affairs of China’s ministry of foreign affairs, said.

Wang was briefing an Indian media delegation, whose visit was sponsored by the state-run All China Journalists Association (ACJA), on China’s stand on the Doklam standoff.

“It is impossible to have a dialogue with India at this time. Our people will think our government is incompetent. Until the Indian side withdraws from the Chinese territory, there will be no substantive talks between us,” she said, while reiterating Beijing’s stand that the only way to end the present crisis on the border was the withdrawal of Indian troops from Doklam.

Needling India, she raised the Kashmir issue and also referred to the Kalapani dispute between India and Nepal.

“We think it is not doable for the Indian side to use tri-junction as an excuse,” she said, referring to Indian external affairs ministry’s assertion that the road building at the China, India and Bhutan tri-junction in the strategic narrow Chicken’s Neck area changes the status quo.

“The Indian side has also many tri-junctions. What if we use the same excuse and enter the Kalapani region between China, India and Nepal or even into the Kashmir region between India and Pakistan,” she said. “Therefore, using the tri-junction as an excuse does not hold water at all. It will only cause more trouble,” Wang added.

This is the first time that a Chinese official sought to bring in the Kashmir issue even though such a remark has been made earlier by a scholar in the state-run Global Times.

Asked whether China was getting ready for a war with India, Wang said, “I can only say that for the PLA (People’s Liberation Army) and for the Chinese government, we have the determination. So, if the Indian side decides to go down the wrong path or still have illusions about this incident, then we have the right to use any act that is in line with the international law to protect our rights.”

Wang said India and China had many standoffs before but “we haven’t issued any position paper till now”.

“But this time we have the position paper and in the position paper, you can find clear information about our position and possible moves by us,” she said, referring to a 15-page fact sheet issued by the Chinese Foreign Ministry few days ago.

“The Indian border troops are sending a signal of aggression while the signals sent by the foreign ministry is for peaceful negotiations. So, we think these two signals do not match with each other,” she said.

Wang also rejected a negotiated solution by restoring status quo with the simultaneous withdrawal of Indian and Chinese troops to their earlier positions.

India’s position on the issue was made clear by external affairs minister Sushma Swaraj recently, saying both sides should first pull back their troops for any talks to take place, favouring a peaceful resolution of the border standoff.

Referring to reports in the Indian media that both the countries’ border troops can withdraw at the same time to restore the status quo, Wang said “this is also unacceptable for China”.

Skirting any references to the shrill campaign being conducted by the official media here, Wang said China is exercising restraint and goodwill.

“In fact, we have expressed many times the diplomatic channel is always open and it is so in the past 50 days but it does not mean that we will not use our power to use the acts of defence in line with the UN charter or relevant international law.”