After Sitharaman’s visit, China says ready to maintain peace at frontiers with India

Sitharaman had a brief conversation with Chinese soldiers during her maiden visit to the Nathu La border post in Sikkim on Monday. 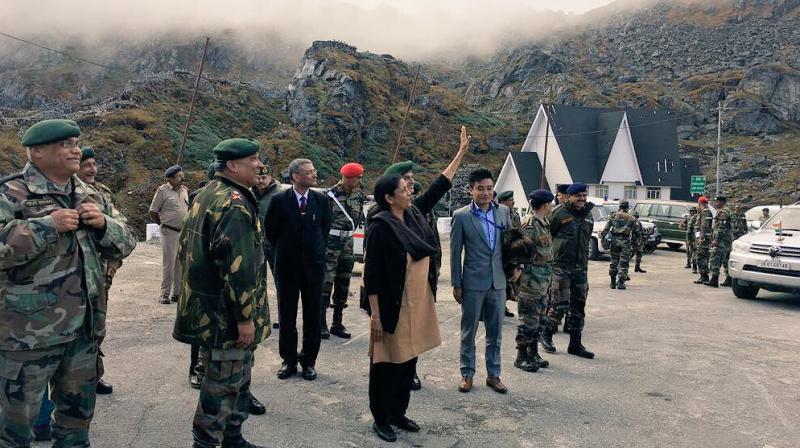 Beijing: China on Monday expressed readiness to jointly maintain peace along the border areas with India and said Nathu La, the frontier post visited by defence minister Nirmala Sitharaman, was the “best witness” to the UK-China treaty of 1890.

Sitharaman had a brief conversation with Chinese soldiers during her maiden visit to the Nathu La border post in Sikkim on Monday and was even seen teaching them how to say ‘Namaste’.

“The Sikkim sector of the China-India boundary has been delimited by the historical treaty of 1890, and the Nathula pass has been the best witness testifying to this fact”, Chinese foreign ministry spokesperson Hua Chunying told a media briefing while reacting to a question on Sitharaman’s visit.

“The Chinese side is willing to jointly uphold peace and tranquillity in the border areas with the Indian side on the basis of observing historical treaties and the relevant agreements and accords between the two sides”, Hua said.

Beijing often referred to the 1890 Britain-China treaty during the Dokalam standoff stating that it has defined the Sikkim section of the boundary with Tibet, therefore the border in that area has been settled. Sitharaman’s interaction with the People’s Liberation Army (PLA) troops at Nathu La with Namaste diplomacy also appears to have struck a chord as Chinese commentators said it sent a “goodwill signal” to mend the bilateral ties following the Dokalam standoff.

“The minister experienced an unexpected wave of goodwill from Chinese soldiers when she visited troops stationed on the frontier between the countries”, the Post report said. Her interaction with the troops of the PLA also sparked positive response among the Chinese netizens on popular social media websites.

“The greeting sent a goodwill signal towards mending bilateral ties and putting relations back on track toward normality”, Qian Feng, an expert at the Chinese Association for South Asian Studies, told the state-run Global Times which carried a separate story on Sitharaman’s Sikkim visit with a caption “Indian Minister waves at PLA”.

The Indian government should show more determination for improving ties as Prime Minister Narendra Modi “enjoys advantages towards achieving that goal”, it quoted Qian a saying.

Of the 3,488-km-long India-China border from Jammu and Kashmir to Arunachal Pradesh, a 220-km section falls in Sikkim. The two sides so far held 19 rounds of talks at the level of Special Representatives to resolve the dispute.

Referring to Sitharaman’s visit to Sikkim, it said “a newly constructed airport that she inspected during the visit, the nearest to China’s border, will be put into use in November”, it said and went on to desribe it as an “aggressive gesture.” But it noted that she had friendly interactions with Chinese soldiers in Nathu La.

Video released by the Indian Defence Ministry shows that she acknowledged the soldiers with a traditional namaste greeting”, it said.

At the same time, it said, “Some Indian nationalists over-estimate India’s strength and rights, assuming New Delhi can bark orders across the border at Beijing”.

“India’s concerns about the Siliguri Corridor’s security are understandable, but New Delhi cannot mess around”, it said adding that China is also concerned about the transport route security across the Indian Ocean and the Strait of Malacca, but Beijing has not taken “coercive measures to achieve its aims”.