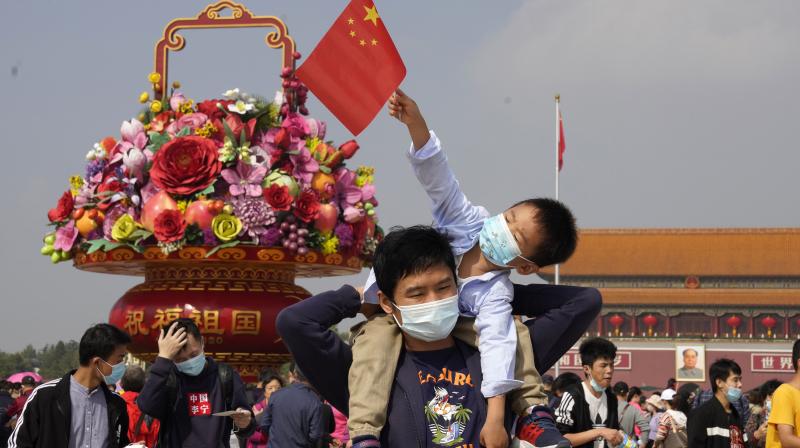 Tourists wearing masks to protect from the coronavirus stand near a floral decoration set up for the National Day celebrations on Tiananmen Square in Beijing on Thursday, Oct. 1, 2020. Negative perceptions of China have increased sharply in many of the world's advanced economies, especially in Australia and the U.K., a new survey from the Pew Research Center showed Tuesday, Oct. 6, 2020. (AP)

Shanghai: Chinese domestic tourism saw a robust rebound over the just-ended Golden Week holiday, encouraged by China’s success in stamping out the novel coronavirus, although levels were still well short of last year.

Tourism sites were visited by 637 million domestic tourists over the eight-day National Day holiday that started Oct. 1, 79% of last year’s total, China’s Ministry of Culture and Tourism said in a statement on Thursday.

That, however, marked an improvement from China’s last long holiday period over May 1-5 for Labour Day, when 115 million domestic tourists travelled and tourism revenues were only 47.56 billion yuan.

Since then, COVID-19 cases have ebbed, with no new community transmissions in mainland China since early August.

"The consumption boom during the holiday is only the beginning of a long-lasting post-pandemic recovery in China, as we believe the recovery will be accelerating in the coming months and will further boost the rebound of China's economy," said Jay Xiao, CEO of Nasdaq-listed consumer finance platform LexinFintech LX.O.

Still, the October Golden Week figures undershot last year’s levels, even though the holiday period was extended this year by a day as it overlapped with China’s mid-autumn festival. [nL2N2GJ05Y]

The figures also defied some expectations that domestic tourism would be much stronger with cross-border travel restrictions and a dearth of international flights deterring millions of Chinese nationals from overseas trips.

“The quick rebound may have alleviated concerns about China’s growth momentum, but it is too early to be complacent,” Betty Wang, senior China economist at ANZ, wrote in a note.

“Tourism revenue during the holiday period only rebounded to 69.9% of last year,” she said, noting core inflation trended lower year-on-year to 0.5% growth in July and August, the lowest level since 2010.”

It also noted strong car sales growth in some areas around the country, with sales in Beijing 23.5% higher.