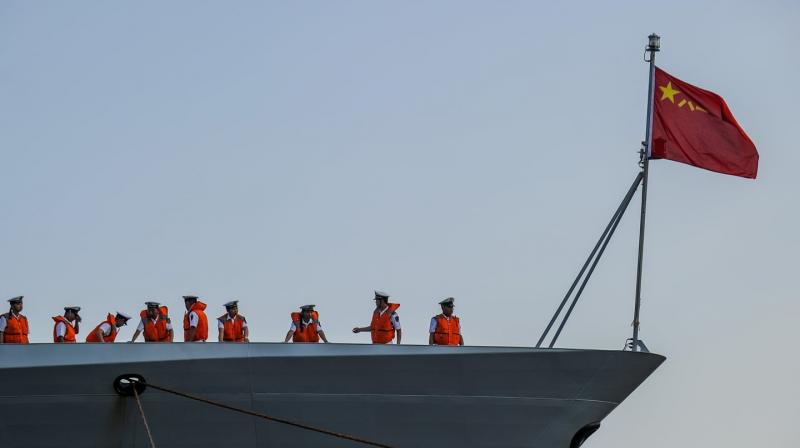 The convoy is being commanded by Rear Admiral Shen Hao, Deputy Commander East Sea Fleet. The visiting ships were accorded a warm welcome during an impressive reception ceremony and received by senior officials of the Pakistan Navy and the Chinese Embassy Staff.

Xinhua quoted Rear Admiral Shen as saying that the visit would further promote understanding and mutual trust between the two nations and boost the cooperation.

Shen hoped that the cooperation and communication between the two navies would be further strengthened so as to contribute to regional stability and world peace.

Later, Chief of the Pakistan Naval Staff Admiral Muhammad Zakaullah also visited the Chinese Ships and met Shen. On his arrival on board, the Chinese Ship's smartly turned out contingent presented him the guard of honour.

During his visit on board, the Pakistani naval chief interacted with the ship's crew and appreciated their operational competence, ISPR said in a statement.

The naval chief said that the Pakistan-China friendship was highly valued and the continued cooperation between them has proven to be a source of strength for both the countries. The admiral added that the visit of PLA (Navy) Task Group was expected to enhance interoperability and maritime collaboration between the two navies.

During their stay at Karachi, the officers and men of the ship will hold professional discussions and interaction with their counterparts from the Pakistan Navy on subjects of mutual interest.

At the end of the visit, a Passage Exercise (PASSEX) will be conducted at the sea between Pakistan Navy Flotilla and PLA (Navy) Task Group to enhance interoperability between the two Navies.