Nearly 3 million people have been affected by the floods with 228,000 forced to seek shelter and 1,300 homes destroyed 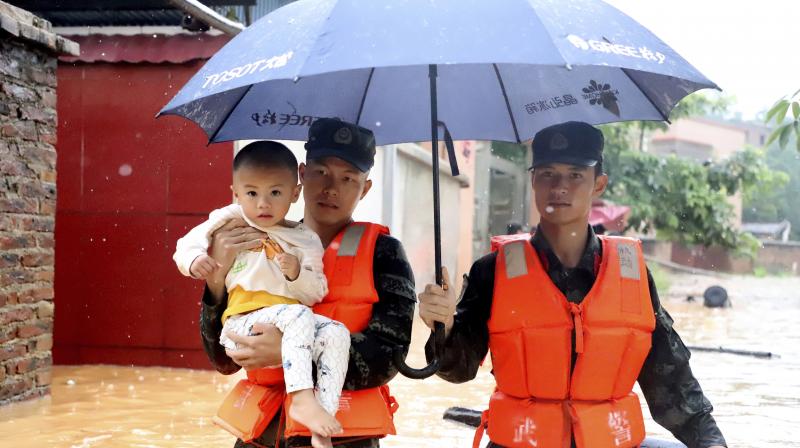 Rescuers carry a child to a boat during an evacuation of a flooded village in Qingyuan in southern China's Guangdong province. (AP)

Beijing: Parts of southern China, still cleaning up from floods that have left at least 20 people dead or missing, are forecast to be hit with more rain over coming days.

Nearly 3 million people have been affected by the floods with 228,000 forced to seek shelter and 1,300 homes destroyed, according to the Ministry of Emergency Management. Direct economic losses are estimated at more than $500 million, the ministry said.

While damage has been concentrated in Hunan province and the Guangxi region, authorities were monitoring the situation in the city of Wuhan, the epicenter of the global coronavirus pandemic, which lies along the Yangtze River, Vice Minister of Water Resources Ye Jianchun said Thursday at a briefing.

In the picturesque town of Yangshuo, famed for its river scenery and karst outcroppings, streets flooded and tourists had to be evacuated on bamboo rafts. The county government said more than 1,000 hotels and home-stays and 5,000 shops suffered water damage.

Firefighters and other public workers pitched in helping to clear debris and spray disinfectant, the official Xinhua News Agency reported.

Seasonal flooding regularly strikes the lower regions of China's major river systems, particularly those of the Yangtze and the Pearl to the south. Authorities have sought to mitigate the damage through the use of dams, particularly the massive Three Gorges structure on the Yangtze.

China's worst floods in recent years were in 1998, when more than 2,000 people died and almost 3 million homes were destroyed.