Terrorists wont be allowed to use Bangla soil: Sheikh Hasina to PM Modi

Sheikh Hasina assured Narendra Modi that her government would never allow the country's soil to be used by any terrorist organisation. 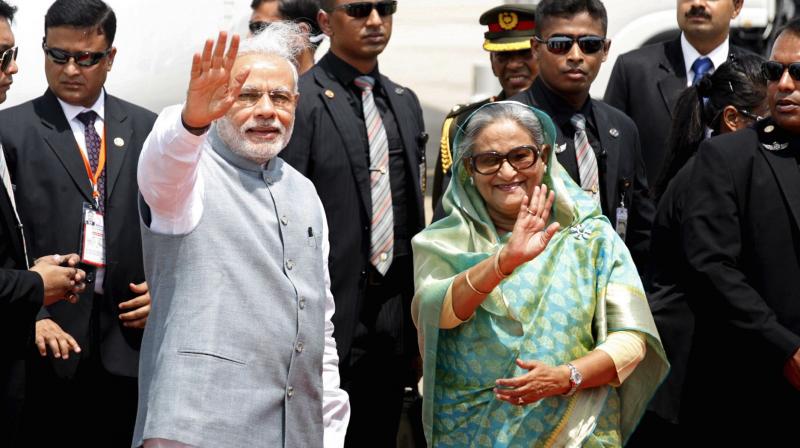 Dhaka: Bangladesh Prime Minister Sheikh Hasina on Monday assured her Indian counterpart Narendra Modi that her government would never allow the country's soil to be used by any terrorist organisation under its "zero tolerance policy".

Dhaka was firmly committed to stamp out terrorism from the South Asian region through bilateral, regional and multilateral cooperation, she said after jointly inaugurating four projects of associated to healthcare, drinking water supply, public transport in Bangladesh with Prime Minister PM Modi through video-conferencing.

Terming the spread of radicalism as a "grave threat" not only to the two countries but to the entire region, India and Bangladesh last year resolved to step up anti-terror cooperation.

"We remain steadfast in our resolve to root out the scourge of terrorism from our region and beyond through bilateral, regional and multilateral cooperation," Ms Hasina said.

The Bangladesh premier said her government would never allow Bangladesh soil to be used by any terrorist organisation under its "zero tolerance policy" against terrorism "in all its forms and manifestations".

Ms Hasina also expressed her "utmost sympathy" for the family members of the Indian paramilitary police personnel who were killed in last month''s terror attack in Pulwama in Kashmir.

"We reiterate our strong condemnation of this dastardly act," she said.

A suicide bomber of Pakistan-based Jaish-e-Muhammed killed 40 CRPF personnel in Kashmir's Pulwama district on February 14, the incident led to flaring up of tensions between India and Pakistan.

Ms Hasina said that the relations between Dhaka and New Delhi is now a "role model" of good neighbours for the rest of the world as a result of multi-faceted and multi-dimensional cooperation.

"I strongly believe this momentum will continue," she said.

The two prime ministers joined the video-conferencing from their offices in Dhaka and New Delhi and jointly inaugurated the four projects by unveiling the e-plaques.

The four projects launched on Monday include, supply of Double Decker and Single Decker AC and Non-AC Buses and Trucks to Bangladesh Road Transport Corporation (under the second Line of Credit); 36 Community Clinics in five north and northeastern Bangladesh districts bordering India with an aid from Indian government; setting up of 11 Water Treatment Plants in two southwestern cities and the extension of India''s National Knowledge Network (NKN) to Bangladesh.

The NKN is a multi-gigabit National Research and Education Network (NREN) which provides a unified high speed network backbone for educational institutions in India.

Ms Swaraj said the four projects, inaugurated by the two prime ministers "symbolise the breadth and depth of our partnership" and also an reaffirmation of our "Neighbourhood First Policy".

She said both the countries should set more ambitious targets which are aimed at preserving the special character of India-Bangladesh ties, as she had earlier said "Neighbours first, and among neighbours, Bangladesh first of all".