At least 14 people were killed in a bomb blast at a fruit market in Pakistan's southwestern city of Quetta. 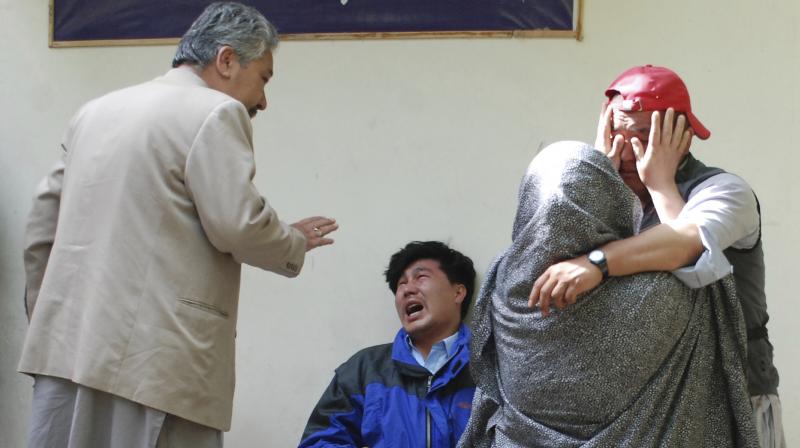 Family members of the blast victims comfort each other outside a mortuary in Quetta, Pakistan. (Photo:AP)

Quetta: At least 21 people were killed and 50 others injured in a suicide bombing at a crowded market in Pakistan's restive Balochistan province on Friday, in an attack believed to be targeting the Shiite Hazara ethnic minority community.

Prime Minister Imran Khan condemned the attack and ordered an inquiry. The explosion at around 7:35 AM took place in the busy wholesale market area of Hazarganj in Quetta where Hazaras and other traders come daily to buy fruits and vegetables to later sell at their shops in other parts of the city. Deputy Inspector General (DIG) Abdul Razzaq Cheema said that the blast, which occurred when the vegetable and fruit sacks were being loaded onto trucks by the traders, targeted the Hazara ethnic community.

However, Home Minister Ziaullah Langove, in a press conference, said that the blast was not targeting "a specific community". "Our guess is that no specific community was targeted. Marri Baloch and Frontier Corps (FC) personnel were among those killed as well.

The numbers of the Hazara community were just greater," Langove said. He also described the blast as a suicide attack. Officials said that 21 people have been killed and 50 others injured in the blast.

An Edhi welfare trust rescue official at the scene of the blast said he had counted around 21 bodies being taken to hospitals. At least eight of those killed in the bomb blast are from the Hazara community, Cheema said.

The security forces fear the death toll may rise, GEO News reported. Buildings located nearby were also damaged in the blast, police said. No group has claimed responsibility for the attack.

Cheema said that due to the blast, security has been provided to shopkeepers and traders at the market. "Traders who come from other parts of the city to buy fruits and vegetables at the market are escorted by police and Frontier Corp personnel," the officer said.

Cheema said around 70 traders had come to the market in different vehicles and were escorted by the FC and Police. He said that the police and FC personnel had put up blocks at the entrance and exit of the market.

"The security forces are here, police are here. What more can we do? We secure them (the community) and travel back and forth with them. If something is hidden in a shop, then the shopkeepers will need to be probed," the officer said.

Hazaras make up a significant minority group in Pakistan and most of them live in Quetta. This is not the first time that the Hazara community has been targeted by militants in the province. Qadir Nayil, a Hazara community leader, asked the government to ensure better protection.

"Once again our people were the target and once again we will have to bury our dear ones," he said. There have been similar terror attacks in the Hazarganj area of Quetta in the past. The market serves as a wholesale market for fruits and vegetables.

Balochistan Chief Minister Jam Kamal condemned the attack and assured that the elements involved in the attack and those leading them would be proceeded against. "People who have an extremist mindset are a menace to the society. We must foil the conspiracy to disrupt peace," he said.

Nearly half-a-million Hazaras have settled in Balochistan, many of them after fleeing war-torn Afghanistan. The National Commission for Human Rights (NCHR) last year stated that 509 members of the Hazara community were killed and 627 injured in various incidents of terrorism in Quetta from January 2012 to December 2017.

NCHR official Fazeela Alyani earlier said that all these lives were lost in Quetta. According to the NCHR, targeted killings, suicide attacks and bomb blasts have inflicted harm to daily life, education, and business activities of ethnic Hazara community members in Balochistan's largest city Quetta.

Balochistan, which borders Afghanistan and Iran, is Pakistan's largest and poorest province, rife with ethnic, sectarian and separatist insurgencies.