The teenagers in the port city of Karachi were said by the Pashtun council of elders, or jirga, to have brought dishonour on the community. 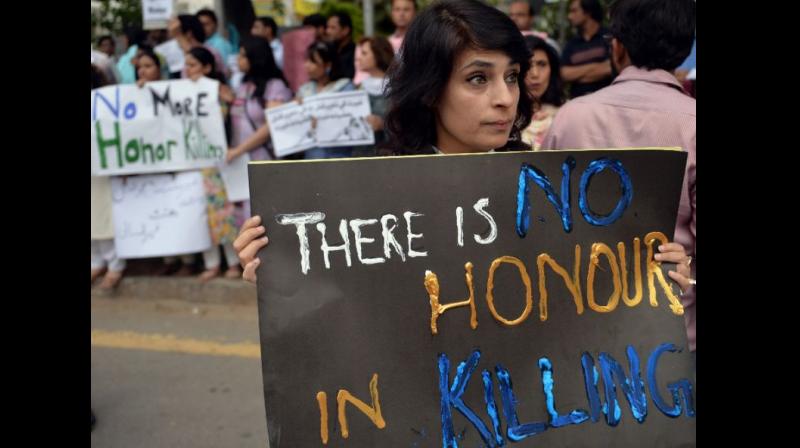 Karachi: A Pakistani teenage couple who tried to elope were murdered with electric shocks in an “honour killing” by family members who were carrying out the orders of an influential tribal council, police said.

The teenagers in the port city of Karachi were said by the Pashtun council of elders, or jirga, to have brought dishonour on the community.

“The innocent souls were tied to a charpai (rope bed) and given electric shocks,” said Aman Marwat, the police officer who arrested the two fathers and two uncles and is pursuing some 30 members of the jirga who have gone into hiding.

The 15-year-old girl had allegedly run away with her 17-year-old boyfriend last month, Marwat said.

“The girl was killed and buried first followed by the murder of the boy the next day,” he added.

More than 500 people -- almost all women -- die in Pakistan each year in such killings, usually carried out by members of the victim’s family meting out punishment for bringing “shame” on the community.

Marwat, who has been in the police for 25 years, said he has dealt with many honour killing cases happening in Karachi.

“It indicates a tribalisation of society where jirgas exercise more power than law enforcers,” said Zohra Yusuf, a human rights activist in Pakistan.

Jirgas are often convened, particularly in conservative rural areas, to settle local disputes especially between poor families, and although they operate outside the law, their decisions are often honoured and ignored by authorities.

In this case, the two families had come to an agreement for the pair to get married, together with a financial settlement to be paid to the girl’s family, according to Kamal Shah, of the Pakistan Fisherfolk Forum, a non-governmental organisation that works in the area.

“The girl’s side had agreed but not the jirga and they warned that if the two families did not carry out the barbaric deed, their family in their village back home would have to bear the consequences,” said Zia Ur Rehman, a Pakistani journalist who first reported on the case.

The case highlights the influence of tribal councils and social pressures in Pakistan, which are often more powerful than the law.

“Laws seem useless,” said Maliha Zia Lari, associate director with Karachi-based Legal Aid Society. “The boy’s father did not think he could seek protection from the state and the jirga members did not fear any reprisals from it either.”