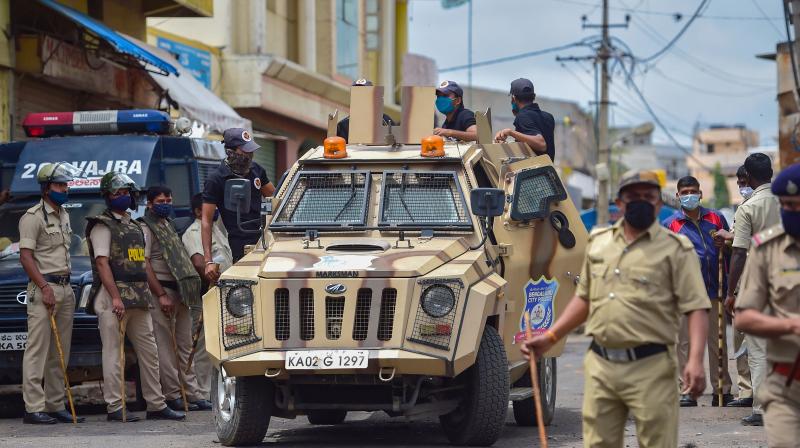 SWAT team patrol at the site of violence after a mob vandalised a police station and burnt vehicles over a social media post, allegedly by a relative of a Congress MLA, in Bengaluru. (PTI)

New Delhi: Seeking to fish in troubled waters, Pakistan on Wednesday lodged a "strong protest" with India through the Indian High Commission in Islamabad on the riots on Tuesday night in Karnataka’s Capital Bengaluru over a controversial social media post.

Islamabad called on the Indian Government “to investigate the incident and take immediate action against the perpetrators of religious hatred” and “to ensure the safety, security and well-being of the minority communities, particularly Muslims” in India.

The move follows Pakistan’s failed attempts to raise the Kashmir issue in the Islamic world and its reported fissures with Saudi Arabia.

In a statement, Islamabad said, “Pakistan lodges strong protest with India on the derogatory social media post ... Pakistan has conveyed its strong condemnation to the Indian High Commission in Islamabad ... ”. Pakistan claimed that the “offensive post against Islam ... reflects the rising Islamophobia and targeting of the minority communities in India”, alleging that the “police instead of preventing this hate crime ... used brute force (and) killed at least three protesters  ... ”.

Pakistan said, “The rising incidents of religious hate crime in India are a direct and inescapable consequence of the RSS-BJP combine’s extremist ideology of ‘Hindutva’. The incident has been viewed with concern and the civil society in Pakistan has called for justice for the minority Muslim community in India.”

Islamabad further said, “Pakistan has called upon the Government of India to investigate the incident and take immediate action against the perpetrators of religious hatred. The Government of India has also been called upon to ensure the safety, security and well-being of the minority communities, particularly Muslims, and take steps to ensure prevention of hate speech and hate crimes against Islam and protection of religious rights of Muslims.”

Pakistan added, “The international community, the United Nations and relevant international organisations should play their role against the rising tide of Islamophobia in India and ensure practical steps for the protection and religious rights of minorities in India”.