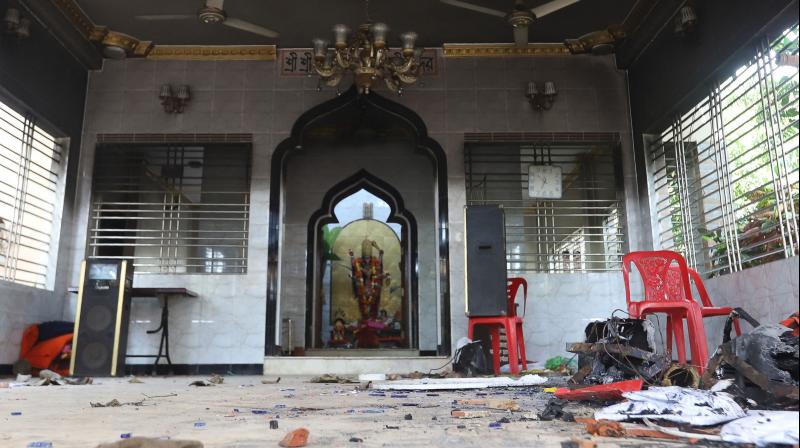 Dhaka: At least four persons were killed in violence after some Hindu temples in Bangladesh were vandalised by unidentified Muslim bigots during Durga Puja celebrations, prompting Prime Minister Sheikh Hasina to deploy paramilitary force in 22 districts on Thursday and promise to bring to justice the culprits behind the incident.

A home ministry spokesperson said that the Border Guards Bangladesh (BGB) troops have been deployed in 22 districts across the country to stop the spread of violence.

The elite anti-crime Rapid Action Battalion (RAB) and the armed police were also ordered to be on guard with the BGB in 22 of the 64 administrative districts and elsewhere to contain any violence, he said.

Three people were killed and several others injured during clashes between Muslim bigots and the police at Hajiganj sub-district in Chandpur, bordering Cumilla on Wednesday while the fourth one succumbed to his wounds later.

Prime Minister Hasina promised to bring to justice the culprits behind the violence, saying anyone involved in the attacks on Hindu temples and Durga Puja venues in Comilla will not be spared.

"The incidents in Comilla are being thoroughly investigated. Nobody will be spared. It doesn't matter which religion they belong to. They will be hunted down and punished," she said while exchanging greetings with the Hindu community members during an event at Dhakeshwari National Temple in Dhaka on the occasion of Durga Puja. She joined the program from from her official Ganabhaban residence through a video-conference.

"We are getting a large amount of information. This is an era of technology and those involved in the incident will definitely be tracked down with the use of the technology," Hasina said.

She also urged India to remain vigilant against escalation of any communal violence. "We expect that nothing happens there (in India) which could influence any situation in Bangladesh affecting our Hindu community here," she said.

Authorities enforced a ban on rallies in Haziganj where officials confirmed the deaths of four people in gunshots, adding that two others were critically injured in the clashes.

The police said that a couple of their officials were injured as the mob attacked them and vandalised their and local administrators' cars.

They, however, did not explain if the casualties were caused due to the police actions but media reports said that the police opened fire on a mob of over 500 people.

According to the officials, the police were alerted about an alleged blasphemy incident at a Durga Puja pavilion in Cumilla, about 100 kms from here, after which a probe was launched.

However, violence erupted as bigots attacked temples in parts of Cumilla, neighbouring Haziganj, northwestern coastal sub districts of Hatia and Banskhali while social media was used largely to instigate the communal tensions.

Hindu religious leaders called the violence as part of a plot to upset the Durga Puja celebrations and demanded action against the bigots and protection of Hindu temples and establishments.

The police said that they have so far detained 43 people in connection with the violence. People who posted the first video on the Cumilla puja venue on social media were also under custody.

"But our government led by (Prime Minister) Sheikh Hasina will not let them proceed with their evil design," he told reporters visiting a Puja pavilion at the Ramkrishna Mission here.

He cautioned people against spreading rumours to sever the interfaith harmony in the country, adding that Hasina has ordered stringent actions against the communal elements.

"We will remain alert," the minister said.

The religious affairs ministry issued an emergency notice, urging members of the public not to take the law into their hands as it reiterated calls to maintain communal harmony and peace, it said.

Hindus make up some 10 per cent of the Muslim-majority Bangladesh's 169 million population. In the past several years, there have been reports of sporadic violence, mostly sparked by rumours spread on social media.