The blast occurred before school had let out for the day and no students or teachers from the kindergarten were injured. 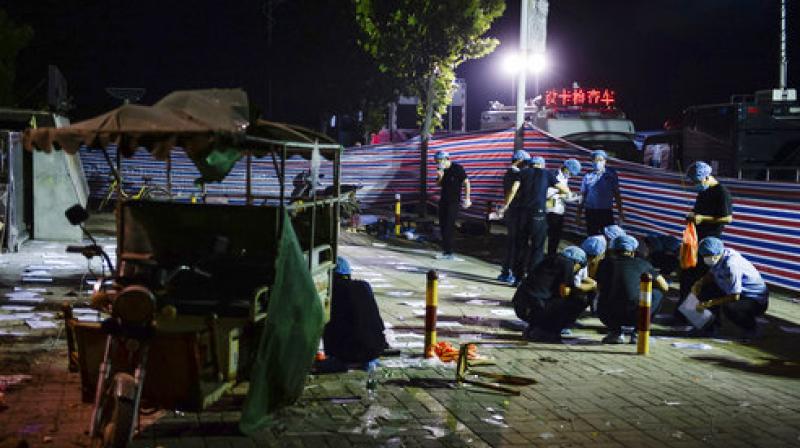 Two people died at the scene and six died after being taken to a hospital following the explosion at 4:50 pm local time on Thursday at the Chuangxin Kindergarten in Fengxian. (Photo: AP)

Beijing: Police have identified a suspect in an explosion at the front gate of a kindergarten in eastern China that killed eight and struck as relatives gathered to pick up their children at the end of the day, local authorities said on Friday.

Police were investigating the explosion as a criminal act and said they had "targeted" a suspect, according to a statement issued by authorities in the city of Xuzhou and the official Xinhua News Agency.

It was unclear if the suspect was apprehended and no potential motive was provided. A witness cited by state media said a gas cylinder at a roadside food stall had caused the blast.

Two people died at the scene and six died after being taken to a hospital following the explosion at 4:50 pm local time on Thursday at the Chuangxin Kindergarten in Fengxian. Initial reports said 59 were injured, but Xinhua and other media reported Friday that 65 were injured including eight who remained in critical condition.

The blast occurred before school had let out for the day and no students or teachers from the kindergarten were injured, according to a statement from local authorities.

However, videos purportedly from the scene showed children - possibly relatives of the kindergartners or passers-by - among the casualties. The videos posted by the state-run People's Daily showed a chaotic scene outside the entrance to the school, with children and adults lying on the ground, some of them motionless and others struggling to get up off the ground.

Clothing, shoes and other items were strewn on the ground beside pools of blood.
The videos showed ambulances arriving, medics wheeling people into an emergency room and medical personnel treating what appeared to be a child.

Kindergartens in China have been attacked before by suspects authorities have said were mentally ill or bore grudges against their neighbours and society.

A witness identified only by the surname Shi told the state-run Global Times in the hours after the explosion that a gas cylinder at a roadside food stall had caused the blast. The force of the blast sent people flying several meters (yards) into the air, Shi was quoted as saying.

In 2010, nearly 20 children were killed in attacks on schools, prompting a response from top government officials and leading many schools to beef up security by posting guards and installing gates and other barriers. Last year, a knife-wielding assailant injured seven students outside a primary school in a northern city.

China maintains tight control over firearms and most attacks are carried out using knives, axes or homemade explosives.