About 1,000 Rohingya men, women and children protested against repatriations, shouting 'We want justice'. 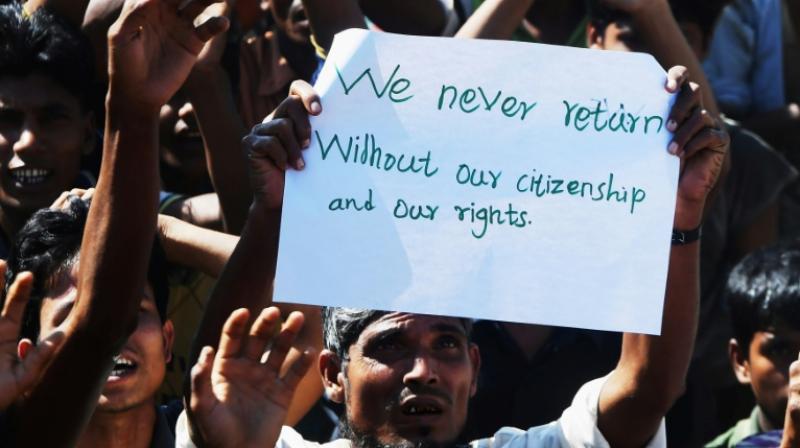 Not a single Rohingya from the 720,000 estimated to have fled a military crackdown in August last year has volunteered to return under a Bangladesh-Myanmar repatriation deal. (Photo: AFP)

Dhaka: Not one Rohingya refugee crossed back into Myanmar from Bangladesh on Thursday under a disputed repatriation programme, officials said, with Yangon blaming Dhaka for bungling efforts to start returning the stateless minority.

Bangladeshi officials waited hours at a border transit point where the first returnees were expected to cross into Myanmar, despite the United Nations warning the displaced Muslims risked fresh persecution if they went back.

But not a single Rohingya from the 720,000 estimated to have fled a Myanmar military crackdown in August last year came forward, with hundreds instead staging a demonstration shouting "We will not go".

"No one turned up voluntarily," Bangladesh refugee commissioner Mohammad Abul Kalam told AFP, adding they were awaiting instructions from the foreign ministry as how to proceed.

With the UN and international aid groups also fighting the controversial plan, Rohingya leaders said many on a Bangladesh repatriation list of 2,260 people had gone into hiding.

Bangladesh expected 150 refugees to volunteer to return Thursday, with five buses waiting to carry them to the border.

But they remained empty, and instead about 1,000 Rohingya men, women and children protested against repatriations, shouting "We want justice".

Tajul Mulluk, 85, who is on the repatriation list, said: "They killed two of my sons. I escaped to Bangladesh with two others. Please don't send us back. They will kill the rest of my family."

"We can't go back," added Mohammad Amin, 45, who was among the protesters.

"They (Myanmar) have tortured us, killed our people. If we go back without any justice, they will repeat the same thing. That's why we protested today."

The United Nations had urged Bangladesh to suspend the programme, with rights chief Michelle Bachelet saying it would send the Rohingya "back to the cycle of human rights violations that this community has been suffering for decades."

Many of the Rohingya who fled Myanmar last year have recounted horrific tales of murder, rape and razed villages. The UN has said a genocide investigation is warranted.

Kalam, the refugee commissioner, said his team was "completely ready" to start sending back Rohingya but stressed that only volunteers would go.

"If we get anyone willing to go, we will carry them to the border point with respect and dignity."

Kalam cknowledged that the UNHCR refugee agency had found no family ready to go. "None feels safe to go back now," Kalam told AFP.

On the other side of the border Myanmar officials also waited all day, said Myint Thu, permanent secretary at the foreign ministry.

"We will continue waiting on our side and will be on standby," he told reporters.

But he lashed out at Bangladesh for being "weak regarding the logistical arrangements" and accused the UN refugee agency of interfering with the process.

"We think the UNHCR should not be a barrier for those who really want to return," he added.

The two countries agreed in November last year to start repatriations but the plan never took off.

With Myanmar refusing to acknowledge any wrongdoing in its treatment of the Rohingya, the operation faced mounting opposition abroad and stoked anxiety in the refugee camps.

US Vice President Mike Pence told Myanmar's de facto leader Aung San Suu Kyi at a summit on Wednesday that the violence against the Rohingya was "without excuse".

He added Thursday that securing justice for the victims of "atrocities" in Rakhine state was a condition for better Myanmar-US relations.

The most recent influx of refugees joined the roughly 300,000 Rohingya who had previously fled violence in Myanmar for camps around the Bangladesh city of Cox's Bazar.

It has left the poor South Asian nation struggling to cope with about one million Rohingya.

UN agencies say they have received only a fraction of the billion-plus dollars needed to pay for their operations for the year.

As the deadline day for repatriation loomed, Rohingya leaders said nearly all those on the returnee list had gone into hiding.

A confidential UNHCR document seen by AFP said the agency would only provide aid if returnees were allowed back to the villages they had left or to other locations chosen by them.

Human Rights Watch had also called on Bangladesh not to send back the Rohingya.

"The Bangladesh government will be stunned to see how quickly international opinion turns against it if it starts sending unwilling Rohingya refugees back into harm's way in Myanmar," said Bill Frelick, HRW refugee rights director.