Nepal, which has a population of 28 million, has conducted only fewer than 100,000 tests so far 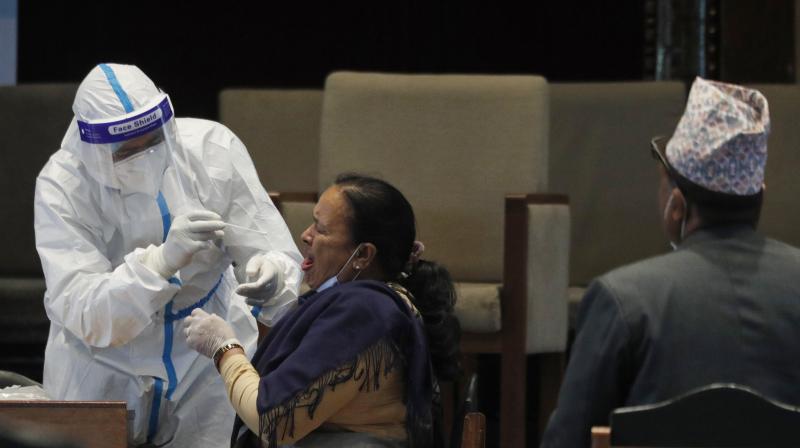 A health worker collects a swab sample from a member of parliament a day before budget session at parliament in Kathmandu. (AP)

The victim -- who was from Sindhupalchowk district, some 90 kilometres (about 55 miles) from the capital Kathmandu -- was on her way to a hospital for treatment when she died.

"It has been proven that is this the first case of death caused by COVID-19 in Nepal," the deputy spokesman for the health ministry, Samir Kumar Adhikari, said in a statement.

The woman gave birth at a hospital in Kathmandu on May 6 and then returned to her home district a day later.

She was treated at a local hospital after suffering from fever and respiratory problems. When her condition worsened, she was referred to another hospital.

Her newborn and other family members will be tested to see if they have contracted the virus, local media reported.

Nepal, which has a population of 28 million, has conducted fewer than 100,000 tests so far. Experts say the lack of mass testing may have prevented identification of other fatalities.

"I don't think this is the first death. There have been cases of deaths where similar symptoms were seen, but the cause was unclear," said epidemiologist Lhamo Sherpa.

"There needs to be more tests, contact tracing... and more transparency."

In January, Nepal was the first south Asian country to report a case of coronavirus. The country has been under lockdown since March 24 after a second case was confirmed.