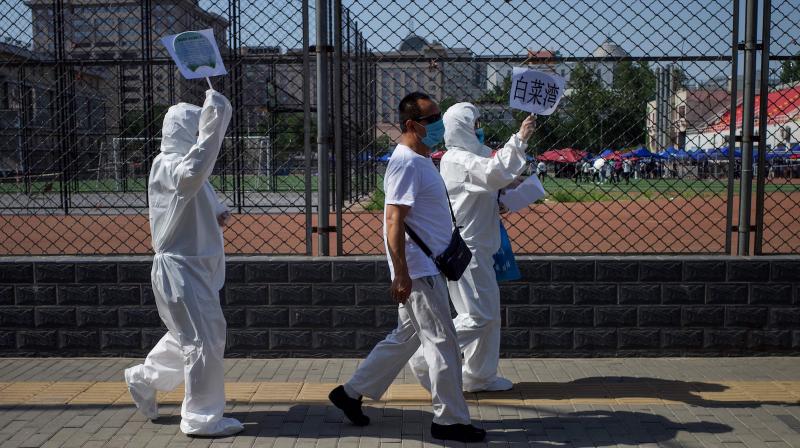 Medical staff members (R and L) in full protective gear carry signs to assist people who live near or who have visited the Xinfadi Market, a wholesale food market where a new COVID-19 coronavirus cluster has emerged, for testing at the Guang’an sports centre in Beijing on June 16, 2020.(AFP)

Beijing: Beijing shut all its schools again on Wednesday as the city reported 31 new coronavirus cases, with authorities in the Chinese capital rushing to curb an outbreak linked to a wholesale food market.

The new cases have raised fears of a second wave of infections as China had largely brought its domestic outbreak under control.

City authorities on Tuesday had also announced a travel ban for residents of "medium- or high-risk" areas of the city, while requiring other residents to take nucleic acid tests in order to leave the capital.

Meanwhile, all schools -- which had mostly reopened -- were ordered to close again and return to online classes.

"The epidemic situation in the capital is extremely severe," Beijing city spokesman Xu Hejian warned at a press conference Tuesday.

Tens of thousands of people in the city linked to the virus cluster -- believed to have started in the capital's sprawling Xinfadi wholesale food market -- are being tested for the virus, with almost 30 residential compounds in the city now under lockdown.

Beijing has now reported 137 infections over the last six days, with six new asymptomatic cases and three suspected cases on Wednesday, according to the city's health commission.

An additional two domestic cases, one in neighbouring Hebei province and another in Zhejiang, were reported by national authorities on Wednesday, while there were 11 imported cases.