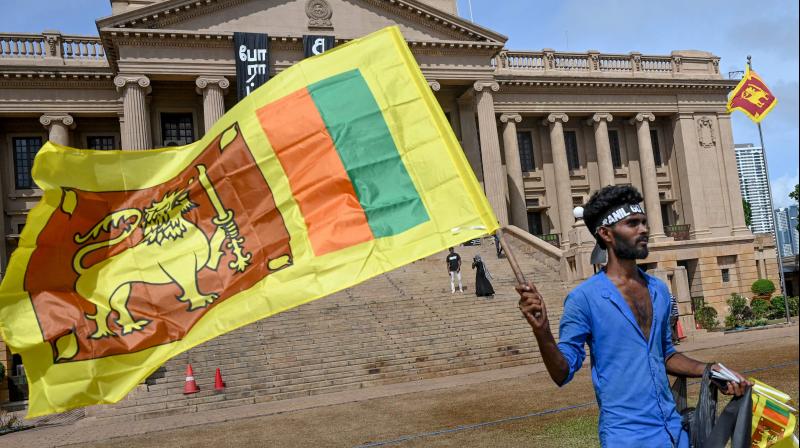 Colombo: Sri Lanka's acting president Ranil Wickremesinghe on Monday declared a state of emergency in the country with immediate effect, ahead of the July 20 election for the post of the president which fell vacant after Gotabaya Rajapaksa's resignation following the popular public uprising against him.

The government gazette dated July 17 imposing a state of emergency in the troubled nation was issued on Monday morning.

The 225-member Parliament is expected to elect the new president on July 20.

The president is empowered to impose emergency regulations in part 2 of the public security ordinance which says (a) if the president is of the opinion that the police are inadequate to deal with a situation he may gazette an order calling out the armed forces to maintain public order.

This means that security forces gain the power to search, arrest, seize and remove weapons and explosives, and enter and search premises or persons.

The order comes as Parliament is set to accept on Tuesday the nominations for the post of president, which fell vacant last week after Rajapaksa fled the country and later resigned.

Rajapaksa is currently in Singapore.

At least four candidates, including Wickremesinghe, are in the race to become the new president who will serve the remaining tenure of Rajapaksa till November 2024.

The voting in parliament is to take place on Wednesday.

On Sunday, the acting president's office said he had ordered the police to keep track of those who threaten and influence parliamentarians in Wednesday's vote.

Besides Wickremesinghe and main Opposition leader Sajith Premadasa, Marxist Janatha Vimukthi Peramuna (JVP) leader Anura Kumara Dissanayake and Dullas Alahapperuma, a breakaway SLPP candidate, are the other two leaders who have so far announced their candidacy to contest the vote in Parliament.

The ruling SLPP has officially announced its backing for Wickremesinghe.

Prime Minister Ranil Wickremesinghe was sworn in as acting President on Friday after the Speaker accepted Rajapaksa's resignation letter sent from Singapore.

The 73-year-old politician is currently the frontrunner though his United National Party (UNP) was routed in the 2020 parliamentary election.

Sri Lanka is facing its worst economic crisis in seven decades, with a severe foreign exchange shortage hampering the import of essentials including food, fuel and medicines.

The economic crisis also sparked a political crisis in the country after a popular uprising against the government.

The island nation off the tip of southeast India needs about USD 5 billion in the next six months to cover basic necessities for its 22 million people, who have been struggling with long queues, worsening shortages and power cuts.