To date, Chinese officials have identified 158 cases in Beijing in the past week 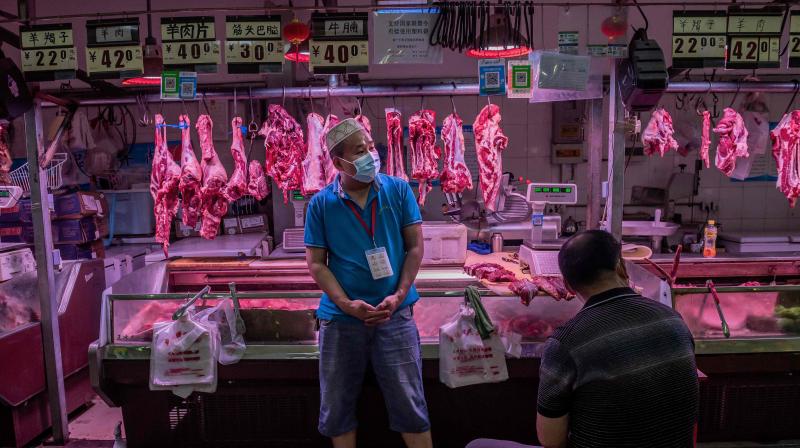 Butchers selling meat stand at their stall as they wait for customers at a market in Beijing on June 20, 2020. (AFP)

London: The emergencies chief of the World Health Organization confirmed Friday that the U.N. agency received genetic sequences from China involving Beijing’s recent coronavirus outbreak and said it appears the virus was exported from Europe.

At a press briefing on Friday, Dr. Michael Ryan noted that “strains and viruses have moved around the world” throughout the virus pandemic and said the fact that a virus from Europe sparked China’s latest outbreak did not mean the virus originated there.

“What it’s saying most likely is that the disease was probably imported from outside Beijing at some point,” Ryan said, adding that “establishing when that happened and how long the chain of transmission is, is important.” He said that many coronavirus strains spreading in New York could also be linked to Europe.

Ryan said that analysis of the genetic sequences China provided so far suggests that the virus spread from other people — and does not suggest that it jumped to humans from animals.

After the new coronavirus was first detected in the Chinese city of Wuhan in late December, officials hypothesized that it likely jumped into people from animals at a wildlife market, although the species responsible has never been identified.

“This coronavirus (in China’s latest outbreak) looks very much like it’s of human origin,” Ryan said, calling for a detailed investigation to determine how the imported cases sparked such a large cluster.

To date, Chinese officials have identified 158 cases in Beijing in the past week. Most, if not all, have been linked to the city’s largest wholesale food market, where thousands of people work.

Ryan said it was essential to understand how the virus spread so quickly and what conditions in the market — included crowded workers, air conditioning and the presence of water — may have helped.

WHO Director-General Tedros Adhanom Ghebreyesus said Friday that the pandemic is “accelerating.” He said more than 150,000 cases were reported to the U.N. health agency on Thursday, the biggest single-day total so far.

Tedros warned countries not to relax their infection control measures too soon, though he recognized that many people have grown weary of lockdown restrictions and that governments are eager to jump-start their nations’ economies.

“We are in a new and dangerous phase,” he said. “The virus is still spreading fast. It is still deadly and most people are still susceptible.”