Since the 1990s, balanced diplomacy has become the basic principle of Nepal's foreign strategy. 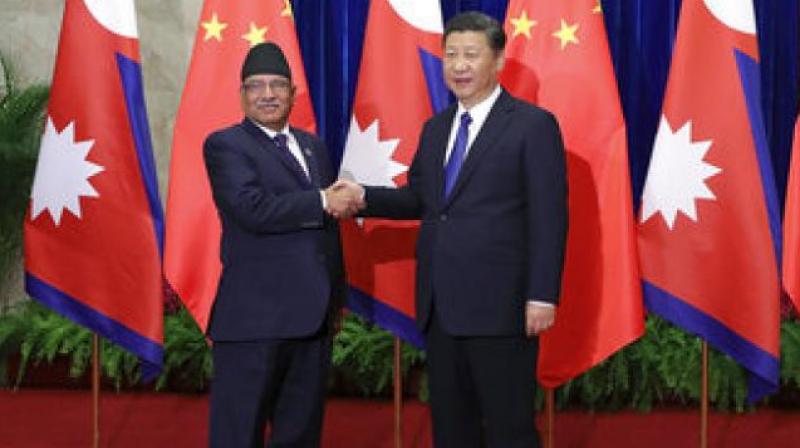 Beijing: Nepal has scaled down the size of its first-ever military exercise with China after facing strong opposition from India, state-run Chinese media claimed
on Friday.

"It was said the two countries initially planned to hold a battalion-scale military exercises. However, facing a strong opposition from India, Nepal had to compress the size of the military exercise and change the venue to a military school,"an article in the state-run Global Times said.

"For Nepal, the joint military exercise has a deeper significance. For starters, it shows that Nepal moves forward in its pursuit of a balanced diplomacy among major powers.

Since the 1990s, balanced diplomacy has become the basic principle of Nepal's foreign strategy, which is established based on Nepal's nationalism and anti-Indian sentiment," the article said.

Chinese official media has been expressing its frustration over the fall of pro-China Nepalese Prime Minister K P Sharma Oli who was replaced by Prachanda.

For China, the fall of the Oli regime was a big disappointment and a setback to its planned big push into Nepal through Tibet with rail and highway linkages to expand its influence in the landlocked country which was dependent on
India for all its supplies, according to analysts.

Prachanda sought to improve ties with India much to the chagrin of Beijing. "Nepal's dependence on India in political, economic, cultural and other aspects as well as India's ambition to make Nepal its sphere of influence has made most people in Nepal fear losing their national independence as Sikkim did," the
article claimed.

"Holding joint military exercises with China can contribute to deterring ethnic separatism in Nepal," it said without elaborating. China has expressed its backing for Nepal's new constitution which was strongly resisted by Madhesis over fears that it marginalised their political and constitutional rights.

"It is a normal development for China to hold a military exercise with Nepal as Nepal is China's friendly neighbour. There are many countries which have held joint military exercises, including India, with China. South Asia is a terrorism-prone region. Now that China and Nepal have developed closer economic relations, Nepal hopes to join China's Belt and Road initiative, for which regional security and stability is a necessity," it said.

The joint military exercise shows that the "bilateral diplomatic relations have expanded from political, economic and cultural to the field of military defence. But for China, this is just one aspect of the overall national security outlook proposed by Chinese President Xi Jinping".

"Nepal has taken a cautious attitude to avoid provoking India. The drill does not violate the Treaty of Peace and Friendship inked by Nepal and India in 1950," it said.

"Due to geographic, political, economic, historic, religious and cultural factors, India has wielded much bigger influence over Nepal than China. Nepal cannot cut its economic ties with India," it said.

India views small South Asian countries such as Nepal and Bhutan as its "sphere of influence and a strategic buffer zone against China". "It sees their relations with China from a geopolitical standpoint and a Cold-War mentality," it said.

"Given the rise of nationalism in India, especially the prevalence of nationalistic sentiments among India's diplomatic circles, Prime Minister Narendra Modi has taken a tough China policy since assuming office. India is concerned about China's economic cooperation with South Asia and the region around the Indian Ocean and wants to push back China's influence," it claimed.

Over the past two years, "India has raised a couple of unreasonable requests toward and imposed pressure on China, dragging the Sino-Indian relations into a vicious cycle".

Nepal's President Bidhya Devi Bhandari is in India on her first overseas tour. She arrived on a five-day trip to India on April 17.