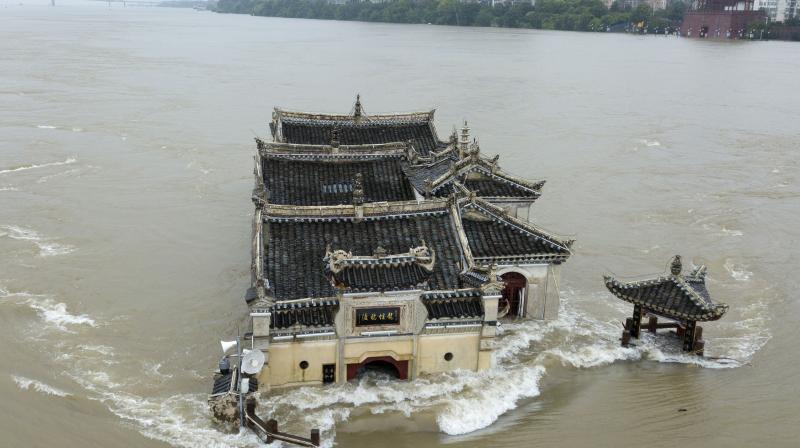 The Kwanyin temple built on a rocky island in the middle of the Yangtze River is seen flooded as the water level surge along Ezhou in central China's Hubei province on Sunday, July 19, 2020. The temple first built in 1345AD has survived numerous floods and been rebuilt over the centuries.(Chinatopix Via AP)

The rains are putting renewed pressure on the massive Three Gorges Dam that straddles the river upstream of the city of Wuhan in Hubei province.

The official Xinhua News Agency said the rate of flow in the reservoir behind the dam would hit a record for the year on Friday night, at 55,000 cubic meters (almost 600,000 cubic feet) per second.

The inflow peaked on Saturday at 61,000 cubic meters per second, before easing to 46,000 by Sunday night, Xinhua later reported.

Rivers in the Yangtze system have broken their banks in places. A helicopter was used to drop stones into a breach to block the inrushing waters in Hubei.

Crews were dispatched with poles to probe waterlogged embankments for weakness and thousands of sandbags were being filled in preparation for more breaches that would need to be swiftly closed.

Water rose to the level of first-floor windows in exposed ancient towns and crops were completely inundated around vast Poyang Lake, a network of waterways that empty into the Yangtze below Wuhan.

On the lake’s eastern edge in Jiangxi province, 45-year-old Xu Yongxiang said his village of Liufang had been without running water or electricity for almost a week. Although it was time for the rice harvest, that crop, along with cotton, corn and beans was now underwater.

“We do not have one inch of dry ground. It has all been flooded,” Xu, who sells pork for a living, was quoted as saying on the official newspaper China Youth Daily’s microblog.

Flooding since the beginning of the month has forced evacuations of around 1.8 million people in 24 provinces, mainly in southern China. Direct losses attributed to flooding are estimated at more than 49 billion yuan ($7 billion), according to the Ministry of Emergency Management.

Floodwaters reached as high as 1.4 meters (almost 5 feet) in Linshui county in the southwestern province of Sichuan, the ministry’s rescue department reported.

Torrential rain also caused three landslides Thursday in a town in mountainous Chongqing, upstream on the Yangtze, leaving six dead, the Chongqing Emergency Management Bureau said. The bodies had been found by Friday evening after more than 200 people were dispatched for search and rescue. The rainfall in the town of Dunhao totalled 39 centimeters (15 inches), the bureau said.

Seasonal flooding strikes large parts of China each year, especially in its central and southern regions, but conditions this year have been especially bad. Major cities have thus far been spared but concerns have risen over Wuhan and other downstream metropolises that are home to tens of millions of people.

China’s worst floods in recent years were in 1998, when more than 2,000 people died and almost 3 million homes were destroyed, mostly along the Yangtze.

The Three Gorges Dam was built mainly to generate electricity, but the government also said it was expected to mitigate catastrophic flooding.