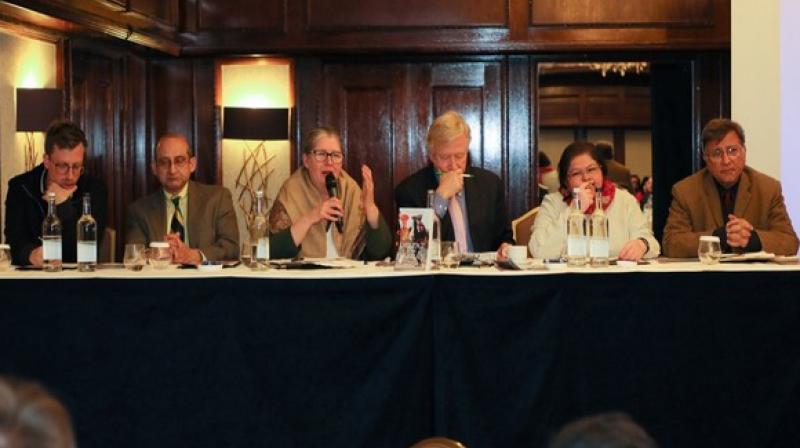 The Democracy Forum, a prominent London-based think tank, hosted a seminar titled 'Economic & Political Power of the Military: Its Impact on Democracy', at the St James' Court Hotel, London on Monday. (Photo: ANI)

London: The Democracy Forum (TDF), a prominent London-based think tank, hosted a seminar titled 'Economic & Political Power of the Military: Its Impact on Democracy', at the St James' Court Hotel, London on Monday.

Setting the tone for the discussions, Lord Bruce, in his opening remarks stated that it was a sine qua non that the role of the military is a frequent and sometimes nefarious participant in the suspension of democratic institutions across the world.

According to the Democracy Index, none of the four countries selected for discussion in the seminar - Pakistan, Myanmar, Turkey and Egypt, scores more than five out of ten in the Index's 2017 international survey, which covers indicators including pluralism, civil liberties and political culture.

Dr Hoodbhoy, Zohra and Z Z Ahmed Foundation Distinguished Professor at Forman Christian College, who focused on Pakistan, opened his speech by referring to two media articles that clearly demonstrated the all-encompassing influence that the Pakistan Army had over the civilian government.

The first article referred to how members of the outgoing Senate, who requested for a presentation of the Nuclear Command Authority Act, passed by Parliament in 2010, never shared the outlines of the Act on grounds that it related to national security.

According to Dr Hoodbhoy, this was hardly surprising, as the Pakistan Army has always said that matters of national security can be entrusted only to those who are 'worthy' of such trust.

The second article concerned the worry, in Pakistani financial circles, on ways to deal with the 'grey-listing' of Pakistan by the Financial Action Task Force (FATF). Though the Army's official mouthpiece, the Inter-Services Public Relations (ISPR) stated that this was not a matter for the army to resolve, Dr Hoodbhoy was of the opinion that all Pakistanis were aware that this issue was largely dependent on the army's change of policy on supporting Lashkar-e-Taiba (LeT)-associated institutions.

To underline the deep-rooted links between the Pakistan Army and terrorist groups, he gave the example of former Pakistan President and Army Chief General Pervez Musharraf banning the LeT in January 2002 following American pressure, while admitting in November 2017 of the Army's links with the group and declaring them 'excellent institutions of Pakistan'.

Dr Hoodbhoy, however, believed that the message from the FATF would affect Rawalpindi, the heart of real power in Pakistan as the army had huge financial interests in Pakistan's national economy, and these interests would be affected by the grey-listing, and even more so by any blacklisting.

Former Reuters journalist and author Myra MacDonald drew on the research conducted for two books she has written - Heights of Madness, about the Siachen war between India and Pakistan, and Defeat is an Orphan: How Pakistan Lost the Great South Asian War - to compare the power of the military in both countries.

MacDonald looked at India and Pakistan's evolving relationship and said that the nuclear tests of 1998 should, in theory, have created parity between them, since Pakistan no longer had any reason to feel insecure about an Indian invasion.

However, in reality, India had used the time since 1998 to emerge as a rising world power, while Pakistan had declined into a 'tottering' state, weakened by its absence of democracy.

MacDonald argued that Indian democracy, combined with diplomacy, had helped to underpin its success while the dominance of the military in Pakistan not only undermined democracy but threatened to turn it into a failing state.

Asking why we value democracy so highly, she said that it allowed for the legitimacy of the State, peaceful settlement of disputes and domestic stability that then led to international strength.

Based on these four criteria, India has thrived and Pakistan has been weakened, as the Pakistan army presented itself as the guardian of the nation, yet in reality created instability rather than stability by running foreign and security policy, manipulating the democratic process and dominating the economy.

She stated that such a centralised, military-dominated economy prohibited poor or middle class people from accessing more resources, building a recipe for conflict, apart from leading people to turn to Islamist or other right-wing religious groups to try and expand their power.

She added that rather than holding the country together, the army's power exaggerated the existing power of Punjab province and caused conflict in smaller provinces such as Balochistan, whose people resented the domination of both the military and of Punjab.

MacDonald, however, expressed optimism that Pakistan's vibrant civil society, as recently illustrated by the Pashtun Long March, would continue its peaceful opposition to the military's influence.

In her presentation, Dr Siddiqa, well known for her book on the Pakistani military, focused on comparing the fledging democracies of Pakistan and Egypt and the role of their militaries.

Dr Siddiqa said that her now-famous concept of 'Milbus' (military business) is not benign wherever it takes place, as no matter how it is justified, it has an inherent illegality because it is meant for the personal benefit of the military fraternity, yet is neither recorded nor part of the defence budget.

"So, when militaries engage in business, it is about a military organisation proactively partaking in resource generation, and thus blurring the line between what is for the public and private good," said Dr Siddiqa.

She highlighted both key differences and similarities between the Egyptian and Pakistani military systems.

According to her, the Pakistan army was much more hierarchical, with fewer chances of coups from within, though in both nations the military had a greater sense of the national good.

The fall of the Turkish army was the main focus for military commentator Dr Hamid Hussain, who described the army's view of itself as a doctor tending to the sick child, secularism, that resulted from the marriage of democracy and Islam.

He offered an overview of the Turkish army's role as guardian of the Kemalist tradition and spoke about Turkish President Recep Tayyip Erdogan's rise to power, and the dynamic between him and the military.

Dr Brenner from the University of Surrey spoke on the Myanmar military and the country's move towards democracy in a top-down, military-led transition.

He gave a short history of Tatmadaw's (the army's) emergence from the struggle for independence from Britain, considering its perception of itself as a 'guardian of the nation' that prevents the Union of Burma from disintegrating, and spoke of how it maintained its economic sources of power through control of assets, resources such as jade and gold, and strategic infrastructure.

Also speaking on the subject of Myanmar was Dr Khan, Labour MP from Tooting, who has personally witnessed the humanitarian crisis of the Rohingya people in the refugee camps in Bangladesh's Cox's Bazar.

Describing what is happening to the Rohingyas in Myanmar as 'nothing short of a genocide', she condemned the West's failure to call to account those who perpetrate such atrocities.

The closing proceedings was TDF chair Barry Gardiner MP, Shadow Secretary of State for International Trade. He thanked the panel, and TDF for organising the event, which was, he said, a timely reminder of why democracy is valuable.

He urged everyone present to use the analysis of the seminar to consider the dangers to democracy and to think about how lack of transparency and accountability can affect us all, not only those living under authoritarian regimes.

The event was well attended, including by members of the Henry Jackson Society, postgraduate students from King's College London, University College of London and the University of Westminster, members of the print and TV media, representatives from the Foreign and Commonwealth Office (FCO), the Ahmadiyya Muslim Community UK, and several embassies and High Commissions. Baroness Shreela Flather was also in attendance.