Indians’ death toll in Lanka rises to 8, many are missing

At least two of the deceased Indians were reportedly political workers of the JD(S) from Karnataka, said the MEA. 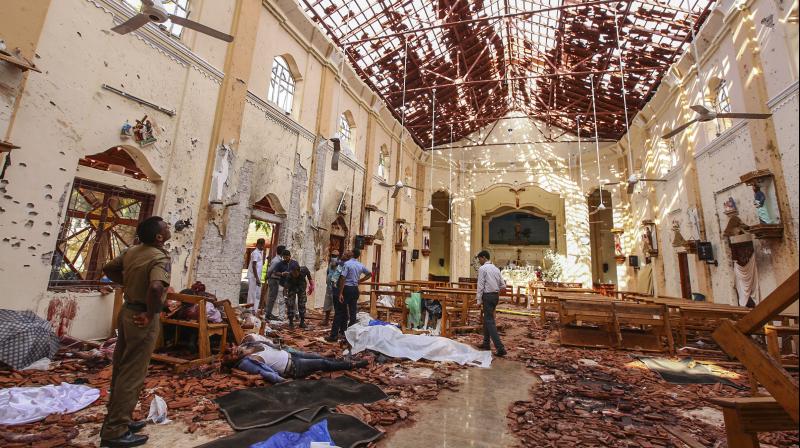 The Sunday attacks were the worst ever against Sri Lanka's small Christian minority. (Photo: AP)

New Delhi: The number of Indian casualties in Sunday’s horrific bomb blasts in Sri Lanka climbed to eight on Monday from three on Sunday.

Later in the evening, it was confirmed that one more Indian national H. Shivakumar had died in the blasts, taking the total number of Indian casualties to eight.

At least two of the deceased Indians were reportedly political workers of the JD(S) from Karnataka, said the MEA.

Karnataka chief minister’s office in Bangalore said that 12 persons from the state, including seven JD(S) workers, are missing after the Colombo blast. It claimed five JD(S) workers had been confirmed dead.

Sri Lankan National Hospital spokesperson said four of the Indians died in the Colombo National Hospital while the bodies of two Indians who succumbed to their injuries from the blast at the Shangri-La Hotel have been sent for autopsy.

Kerala chief minister Pinarayi Vijayan had dentified a Keralite, P.S. Rasina (58), among those killed in the blasts.

Seven suicide bombers believed to be members of an Islamist extremist  group — the National Tawheed Jamath (NTJ) — carried out a series of devastating blasts that tore through three churches and luxury hotels in Sri Lanka on Easter Sunday, killing 290 people and wounding 500 others, including Indians, in the country’s worst terror attack.