At least 11 killed, 20 injured in bombing in southwest Pakistan

Official said said the bomb was planted in a moving car, but officers were trying to determine whether it was a suicide attack. 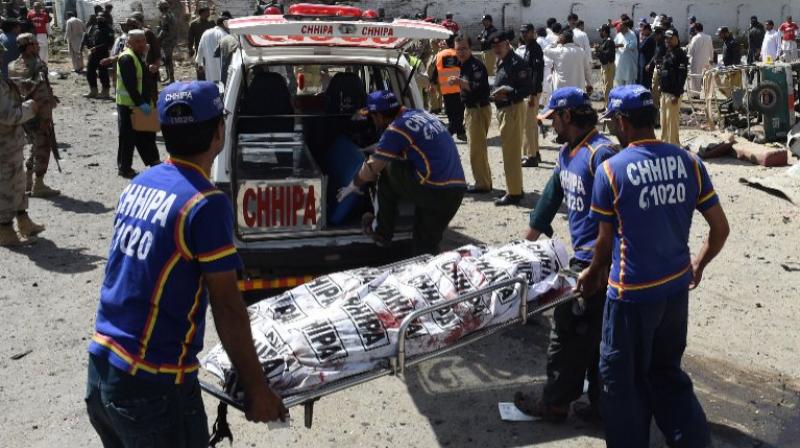 Quetta: A powerful car bombing near the office of the provincial police chief in southwestern Pakistan on Friday killed 11 people and wounded 20, officials said.

The explosion near the police chief's office in Quetta, the capital of Baluchistan province, was powerful enough that it was heard across the city, shattering windows of nearby buildings, said police spokesman Shahzada Farhat.

Wasim Beg, a spokesman at a government hospital, said the death toll from the bombing rose to 11. He said some people remained in critical condition. TV footage showed several badly damaged cars and a road littered with broken glass.

Anwarul Haq Kakar, a spokesman for the provincial government, said the bomb was planted in a moving car, but officers were trying to determine whether it was a suicide attack.

No one claimed responsibility for the attack but Kakar blamed neighboring India for the blast. He offered no evidence.

On Thursday, Pakistan said that an Indian naval officer, Kulbhushan Jadhav, who was sentenced to death by a Pakistani military court on charges of espionage and sabotage, had petitioned for mercy.

Jadhav, who Pakistan said had crossed into Baluchistan from neighboring Iran, was arrested in March 2016 and sentenced to death in April.

In New Delhi, the Ministry of External Affairs insisted Jadhav was sentenced on "concocted charges" and expressed doubts about the existence of the petition for mercy. It also reiterated that the proceedings against Jadhav have been shrouded "in opacity."

Baluchistan has long been the scene of a low-level insurgency by Baluch nationalists and separatists, who want a bigger share of the regional resources or outright independence, but also other attacks, mostly blamed on the Pakistani Taliban.