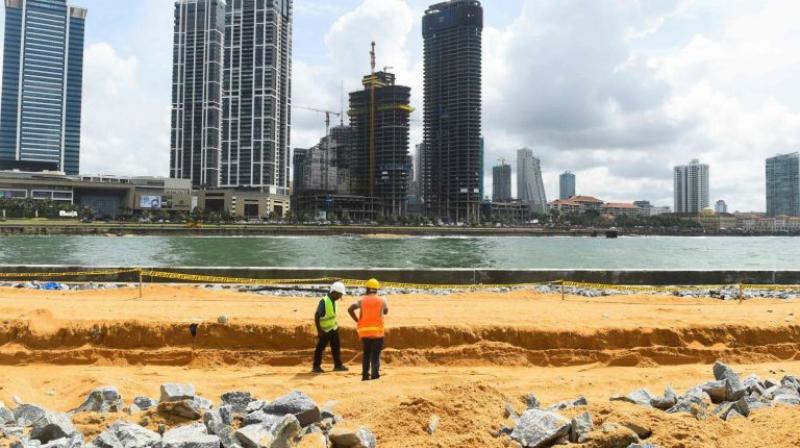 The workers, who launched the 'Black Week' protest on Wednesday, alleged that government had reneged on the pledge to make the ECT operational as a Sri Lankan venture.(AFP)

Colombo: Wearing black armbands, the workers of the strategic Colombo Port have restarted their protest against a proposed deal with India to develop a deep-sea container terminal of the country's largest and busiest port.

The workers ended their protest on July 3 following a meeting with Prime Minister Mahinda Rajapaksa, a day after they had threatened to go on an indefinite strike if the government allowed a foreign country to develop the Eastern Container Terminal (ECT).

The previous Sirisena government signed a "memorandum of cooperation" (MOC) with India and Japan for a tripartite effort to develop the ECT which is located just next to the USD 500 million Chinese-run Colombo International Container Terminal (CICT).

Although the MOC was completed last year, a formal agreement for the terminal's development is yet to be signed and the trade unions are pressing the government to abandon the MOC and develop the terminal as a 100 per cent Sri Lankan venture.

The workers, who launched the 'Black Week' protest on Wednesday, alleged that government had reneged on the pledge to make the ECT operational as a Sri Lankan venture.

"The government must say who is pressuring them on this. If it is India, then we will say that port's future will be in danger," Shamal Sumanaratne, a trade union leader told reporters.

The port workers have roped in influential Buddhist monk Elle Gunawansa to join them. The monk blessed the protestors and issued a warning to the government.

"We will give this government more time, if they don't want to do the right thing, we will take to the streets," Gunawansa said.

Prasanna Kalutharage, another trade union leader, said the port workers would ensure 50 million rupees to the Treasury every month through ECT's operation as a 100 per cent Sri Lankan venture.

The workers said that one of the solutions offered at the meeting with Rajapaksa was to install three newly-imported gantry cranes at the ECT, which is not being fulfilled as due to the deliberate delay in work.

They expressed happiness after the meeting with Rajapaksa, asserting that they had won the round one in getting permission to instal the cranes while the next step would be to operationalise the ECT.

The workers said the crisis at the port would be decisive to the government at the parliamentary election on August 5.

"The government would learn a lesson at the election," warned KPP Krishantha, another union leader.

Both President Gotabaya Rajapaksa and his brother and Prime Minister Mahinda Rajapaksa have appealed to the voters to give them a mandate as large as two thirds of seats in the 225-member parliament.

Earlier this month, the prime minister told reporters that no final decision had been made yet to hand over the development of the ECT to India.

"This was a diplomatic agreement with India signed by the last government  an agreement between President Sirisena and Prime Minister (Narendra) Modi," he had said.

The trade unions were protesting against the alleged "Indian pressure" to prevent Sri Lanka from developing the ECT on its own.

They have called for expediting the development of the East Terminal and are against handing it over to a foreign country.

Colombo Port is the largest and busiest port in Sri Lanka. Located on the southwestern shores on the Kelani River, it serves as an important terminal in Asia due to its strategic location in the Indian Ocean.