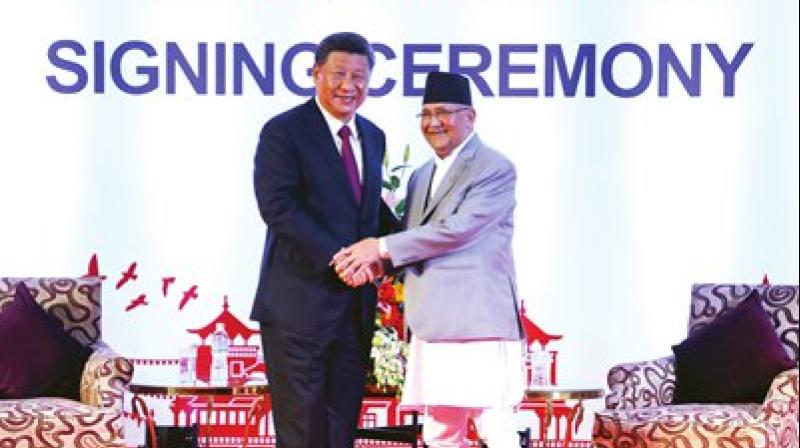 Kathmandu: As China continues to wield its influence over various countries, Beijing's nexus with the top establishment in the Nepal government has raised serious doubts over the Himalayan nation's 'autonomy' and 'ability to take independent decisions', according to a report in Global Watch Analysis.

According to an article by Roland Jacquard, the author explains China's policy of corrupting the political class of a country, especially those who are not economically strong. He also details how the foreign policy of Nepal, the latest entrant to fall victim to China's strategic expansionism, has veered towards pushing the interests of Beijing.

In January last year, the day when China condemned United States' move to slap economic sanctions on Venezuela, the ruling Nepal Communist Party (NCP) also issued a similar statement denouncing Washington and its allies for intervening in Venezuela's internal matters. This was probably the first time Kathmandu had taken a stand pertaining to US policies in Latin America.

Another worrying and trend noticed in Nepal is the deteriorating human rights condition of Tibetan refugees residing in Nepal. The Himalayan nation shares a long border with Tibet and is home to over 20,000 Tibetan exiles, many of whom coming into the country after the Dalai Lama took refuge in India in 1959.

According to a recent report submitted to the United Nations (UN), two human rights groups -- Washington-based International Campaign for Tibet and the Paris-based International Federation for Human Rights -- have noted that the new arrivals of Tibetans to Nepal often face threats of being deported to China.

With the growing links between the Nepal government and China, Tibetan refugees are barred from holding elections to elect members of their refugee associations or celebrate the Dalai Lama's birthday, Jacquard writes in the article.

Attempts to protest against Chinese persecution are met with a heavy-handed response by Nepali authorities, says the writer.

To ensure that the top establishment of Nepal carries out China's bidding, the Chinese Embassy in Kathmandu has been steadily building a network of loyalists, and doles are given out to them, many times on the pretext of legitimate jobs undertaken for the embassy.

For instance, the Chinese Embassy in Kathmandu awarded a contract of 1.5 million Nepali rupees to Rajan Bhattarai, a member of the NCP and who is currently Prime Minister KP Sharma Oli's Foreign Affairs Advisor, for a research paper on Nepal-India relations. When the initiative started in October 2017, Bhattarai was a member of the Eminent Persons Group on Nepal-India Relations and the Chairman of the Nepal Institute for Policy Studies.

According to the contract, Bhattarai's wife Geeta Gautam while he would oversee the project. The payment for the duty was sent to Bhattarai's account in Nabil Bank.

"The contract was what the Chinese would call 'a win-win', as it not only found a way to engage a senior NCP functionary in a financial transaction, it also came with an added understanding of Nepal's policies towards India," the writer states.

Bhattarai was appointed as Foreign Affairs Advisor to Oli in November 2018. While it is not clear whether China played a role in his appointment, what is interesting to note that despite his position in the Prime Minister's Office, Bhattarai continued to keep contact with Li Yingqiu, a Chinese diplomat posted in the Nepali capital.

"With Nepal's Prime Minister's Office, including its senior advisors, known to have established a transactional relationship with China, it raises serious doubts about the autonomy of the government and its ability to take independent decisions," Jacquard says in the article.