The aim is for Gwadar to become a regional commercial, industrial and shipping hub, as part of the ambitious CPEC project. 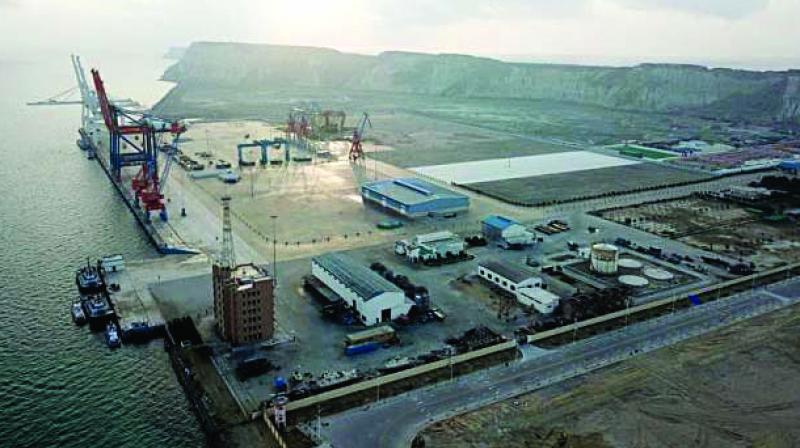 The corridor is designed to give China a shorter, more secure trading route, via Pakistan, to the Middle East and beyond, while also boosting Pakistan’s economy. (Photo: File)

Gwadar: For over a decade, Pakistani officials have dreamed of transforming the small but strategically located fishing port of Gwadar into a duty-free port and free economic zone – Pakistan’s answer to Dubai.

The aim is for Gwadar – located on the Arabian Sea near Iran and the mouth of the Persian Gulf – to become a regional commercial, industrial and shipping hub, as part of the ambitious China Pakistan Economic Corridor (CPEC) project.

The corridor is designed to give China a shorter, more secure trading route, via Pakistan, to the Middle East and beyond, while also boosting Pakistan’s economy.

Right now, however, the dusty “next Dubai” on Pakistan’s coast resembles the original mainly in one respect – it doesn’t have much water.

Abdul Rahim, who works for the Gwadar Development Authority, under the provincial government of Balochistan, said climate change is playing a role in Gwadar’s thirst.

“I would say because of climate change the rains have stopped – it used to rain much more often and in every season. Now Gwadar is facing severe water issues. There is no fresh water here,” Rahim said.

Nearby Akra Kaur reservoir dried up two years ago, and water must now be brought from a more distant source, he said. Some of the water coming in is contaminated, leading to an increase in waterborne illnesses such as hepatitis, he added.

Tapping groundwater isn’t a solution. “There is no point in digging wells as the underground water is all brackish,” Rahim said.

Right now, the Gwadar peninsula – a hammerhead-shaped projection of land into the Arabian Sea – is home to about 100,000 people, following completion of the first phase of the port development.

But as development continues, the area’s population is expected to grow to 500,000 by 2020, according to the port authority’s website.

On one side of the peninsula is the deep-sea port, built by the Chinese state-owned China Overseas Holding Company. On the other side lies the local harbour.

Fishing was Gwadar’s main economic activity before the port started operations, and some local people say they so far see little benefit in the government’s grand plans.

“We are dying from thirst, there are no doctors in our hospitals, the electricity comes and goes and there is garbage everywhere as no one collects it,” complained Rasool Bux, a fisherman who lives near the harbour.

“First fix all these problems. Then develop this dream of Dubai,” he urged.

Bux said most in the town get their water from tankers that make the two-hour drive from Mirani Dam. But the tankers only come once or twice a month to his area, Bux said, and shortages are common.

Muhammad Ali Kakar, the province’s planning and development secretary, told a government committee in December that the total demand for water in Gwadar city was 6.5 million gallons a day, but tankers supplied only 2 million gallons.

To help solve the water shortages two desalination plants have been built in the port, with Chinese expertise. The smaller can provide 200,000 gallons of potable water per day to the port, while the larger one, recently completed in the adjacent duty-free zone, can supply double that amount.

Both plants rely on power from generators, as there is not enough grid power in Gwadar to run them, said Sajjd H. Baloch, the director general of Gwadar Development Authority.

Some fishermen say they now buy clean drinking water from the port, paying up to 50 Pakistani rupees (around USD 0.40) for a three-litre can.

Gul Mohammed, the operations director for the port authority, said his agency was willing to supply clean water outside the port and duty-free zone, but would need to be paid to produce it.

“We are willing to provide water from the larger plant to the city of Gwadar at the rate of 0.98 rupees per gallon, but the Government of Balochistan has to sign an agreement with us,” he said.

The provincial government is reluctant to accept the offer, hoping for rains this year to fill the Akra Kaur dam, Rahim said.

The Pakistani army, tasked with protecting the CPEC project, meanwhile, also has laid the foundation for a large desalination plant to be built with help from the United Arab Emirates and Switzerland.

The plant, to be completed by July, will provide 4.4 million gallons of water a day, free of cost, to the inhabitants of Gwadar city, according to an army press release.

Providing better services, including clean drinking water, is seen as a way of helping win local support for the development push – and to help quell an ongoing insurgency by Baloch separatists in the province.

As part of the winning-hearts effort, the army also has brought in specialist doctors to supplement those already working at the local government-run hospital.

A new road will soon connect the port to the Makran Coastal Highway, which links Gwadar to Karachi. Gwadar’s new airport will be Pakistan’s largest when it is complete.

The China Power Company also plans to open a 300 megawatt coal-fired power plant around 20km (12 miles) from the port to provide electricity to Gwadar.

Meanwhile, tourism has started too, and the port is increasingly bustling with visitors.

“Certainly the security in Gwadar has improved considerably in the last two years. I would say that, given all the recent development, the dream of Dubai will be realised in a decade or so,” said Munir Ahmed, a port security officer.