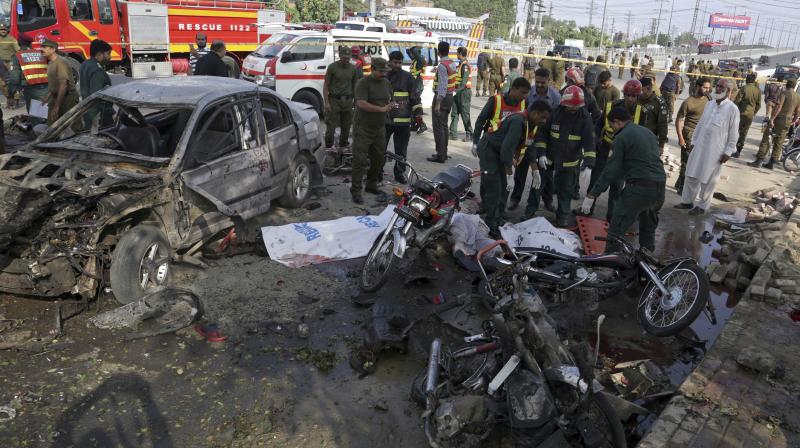 Pakistani rescue workers prepare to remove a body from the site of a deadly bombing in the eastern city of Lahore, Pakistan, Monday, July 24, 2017. (Photo: AP)

Lahore: At least 26 people, including policemen, were killed and 57 others injured today when a suspected suicide bomber targeted police personnel deployed near residence-cum-office of Pakistan's Punjab province Chief Minister Shahbaz Sharif in Lahore.

Lahore police chief Capt (R) Amin Wains confirmed that it was a suicide blast and the "target was police".

The chief minister, who is also the brother of Prime Minister Nawaz Sharif, was in a meeting at his Model Town office when the blast took place.

The Punjab government confirmed that 26 people were killed and and 57 others injured in the blast. One Sub- Inspector, 1 ASI and 6 Constables were among dead, it added.

Rescue teams shifted the injured to hospital. Emergency was declared in city hospitals. "The condition of several injures is stated to be critical" Shahnaz said.

"29 injured persons are being treated at Lahore General Hospital, 9 in Jinnah and 18 in Ittefaq hospital," the official Twitter account of the Government of Punjab tweeted.

No group has claimed responsibility for the blast.

Citing police sources, the Geo News reported that a suicide attacker targeted police personnel deployed at the site. The area has been cordoned off by a heavy contingent of security forces and the section of the road has been sealed.

"We are collecting evidence and this could be a suicide bombing. The death toll includes police and civilians," DIG Operations Haider Ashraf was quoted as saying.

"No words can express the grief which grips my heart right now. Blast destroyed many families, but terrorists can never destroy our resolve," Chief Minister Shahbaz Sharif said.

"Our blood was spilt on the street but I swear to my Allah that the blood of our innocent martyrs will write end of these cowardly assassins!," he tweeted.

Punjab Law Minister Rana Sanaullah said terrorism can not be ruled out as the motive behind the explosion. He added that security forces are conducting their investigations.

In April, six persons were killed and 15 others injured when a suicide bomber targeted a population census team in Lahore's Bedian Road.

In February, a suicide bomber killed 14 people, including senior police officers, near the Punjab Assembly here.