Protesters urged Abe to resign, as riot police kept tight security outside the venue of his ruling party’s annual convention. 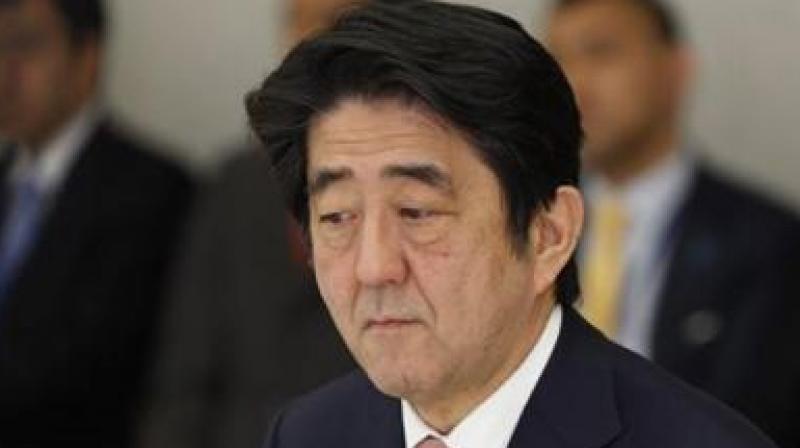 Japanese Prime Minister Shinzo Abe, his ratings in a slump amid a suspected cronyism scandal and cover-up, apologised again on Sunday for causing anxiety and loss of confidence in his government. (Photo: File)

Tokyo: Japanese Prime Minister Shinzo Abe, his ratings in a slump amid a suspected cronyism scandal and cover-up, apologised again on Sunday for causing anxiety and loss of confidence in his government.

Protesters urged Abe to resign, as riot police kept tight security outside the venue of his ruling party’s annual convention, at which the premier stressed his intention to revise Japan’s pacifist post-war, US-drafted constitution.

Abe faces his biggest political crisis since taking office in December 2012 as suspicions swirl about a sale of state-owned land at a huge discount to a nationalist school operator with ties to his wife.

“This problem has shaken the people’s confidence in the administration,” Abe told the convention. “As head of the government, I keenly feel my responsibility and would like to deeply apologise to the people.”

He pledged a thorough clarification of the facts and the prevention of a recurrence by pulling the government together, but offered no sign of stepping down.

Abe has denied that he or his wife intervened in the sale or that he sought to alter documents related to the deal.

His close ally, Finance Minister Taro Aso, has also denied involvement in the alterations made by ministry officials.

Public opinion polls last weekend showed support for Abe’s cabinet sinking as low as 31 percent, with majorities saying he bears some responsibility for the affair.

The sliding support rates could dash Abe’s hopes of winning a third three-year term as ruling Liberal Democratic Party (LDP) leader in a party vote in September, victory in which would set him on track to become Japan’s longest ruling premier.

“We’re protesting to defeat Abe’s government through our voices and the anger of the people,” said Fumiko Katsuragi, 69, who was among hundreds of protesters gathered in a Tokyo park where cherry blossoms were in full bloom.

Some held banners that read “Go to jail Abe” and “No constitutional revision or war,” while right-wingers gathered nearby amid police security.

Also at the party convention, the LDP adopted a proposal to revise the pacifist constitution in line with a plan floated by Abe last year to explicitly refer to the Self-Defense Forces, as Japan’s military is known.

“The time has finally come to tackle constitutional revision, which has been a task since the founding of the party,” Abe said.

“Let’s stipulate the Self-Defense Forces and put an end to a controversy about violation of the constitution.”

Abe proposed in May 2017 that the first two clauses of Article 9, which renounces the right to wage war and bans maintenance of a standing military, be unchanged but that a reference to the SDF be added to clarify its ambiguous status.

Despite its literal ban on a standing army, successive governments have interpreted the charter to allow a military exclusively to defence.

Abe wants to make that stance clear in the constitution itself, but says the change will not alter Japan’s security policies. Critics worry the revision would open the way to a bigger role for the military overseas.

Abe’s weakened support and a wary junior coalition partner could make it hard for the LDP to push for the change, which would spark a divisive debate.

Japan’s constitution has never been amended and any changes require approval by two-thirds of each house of parliament and a majority in a public referendum.