Chinese navy ships to be deployed at Gwadar: Pakistan

Having a naval base in Gwadar could allow Chinese vessels to use the port for repair and maintenance of their fleet in Indian Ocean region. 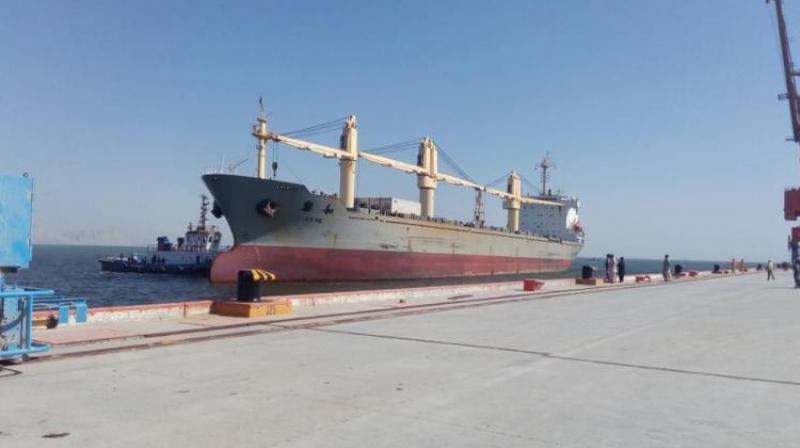 China and Pakistan are currently building the nearly 3,000-km-long economic corridor linking Pakistan's Gwadar port on the Arabian Sea with Xinjiang to improve connectivity between the two countries. (Photo: AP)

Karachi: China would deploy its naval ships along with Pakistan Navy to safeguard the strategic Gwadar port and trade routes under the USD 46 billion China-Pakistan Economic Corridor, a navy official here has said, shedding light on a plan likely to alarm India.

China and Pakistan are currently building the nearly 3,000-km-long economic corridor linking Pakistan's Gwadar port on the Arabian Sea with Xinjiang to improve connectivity between the two countries. The move would open up a new and cheaper cargo route for transporting oil to China as well as export of Chinese goods to the Middle East and Africa.

A Pakistan Navy official said the role of maritime forces has increased since the country has made the Gwadar port operational and speeded up economic activities under the China-Pakistan Economic Corridor (CPEC).

"China would also deploy its naval ships in coordination with Pakistan Navy to safeguard the port and trade under the CPEC," the unnamed official was quoted as saying by The Express Tribune.

In the past, China has shied away from saying that it plans to deploy its naval ships in Gwadar, a move which could raise alarm in the US and India.

Experts feel that CPEC and the Gwadar port would enhance the military capabilities of both China and Pakistan, and make it possible for the Chinese Navy to easily access the Arabian Sea.

Having a naval base in Gwadar could allow Chinese vessels to use the port for repair and maintenance of their fleet in the Indian Ocean region. Such a foothold would be the first overseas location offering support to the Chinese navy for future missions.

Pakistani defence officials are keen for the Chinese navy to build up its presence in the Indian Ocean and the Arabia sea, mainly to counterbalance India's formidable naval force.

The Pakistani official also said that the Navy is considering buying super-fast ships from China and Turkey for its special squadron to be deployed at the Gwadar port for the security purpose.

"A squadron may have four to six warships," he said on the sidelines of the on-going defence exhibition, IDEAS 2016, at the Karachi Expo Centre.

The ships would be bought soon keeping in view their immediate need in the fleet, he said, adding that two defence ships have already been deployed at Gwadar.

Another official of the naval force added that Pakistan has kicked off the process of establishing the largest shipyard of the region in Gwadar. A similar ship-building project is being deliberated at Port Qasim in Karachi.

The two advanced shipyards would design and develop ships and other security equipment for Pakistan Navy.

"The existing shipyard, the Pakistan National Shipping Corporation, lacks capacity to meet new requirements of the force. Its (PNSC) performance, however, would improve in competition with the two under consideration," he said.