The charges against Zia had led to her boycotting polls in 2014, which triggered widespread protests at the time. 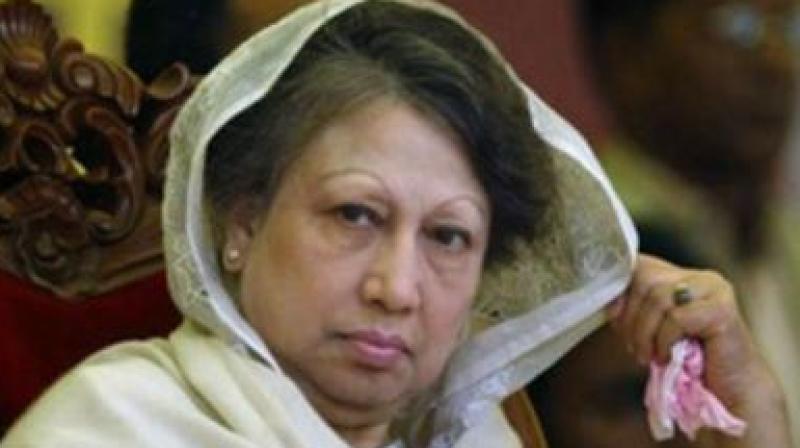 A court in Bangladesh on Monday extended the bail of imprisoned ex-prime minister and main opposition BNP chief Khaleda Zia until March 13 in a graft case. (Photo: File)

Dhaka: A court in Bangladesh on Monday extended the bail of imprisoned ex-prime minister and main opposition BNP chief Khaleda Zia until March 13 in a graft case, a day after the High Court deferred the judgement on a separate bail plea in a corruption case, media reports said.

The 72-year-old three-time former prime minister was jailed for five years on February 8 in connection with the embezzlement of 21 million taka (about USD 250,000) in foreign donations meant for the Zia Orphanage Trust, named after her late husband Ziaur Rahman, a military ruler-turned-politician.

The Dhaka Special Judge’s Court-5 set March 13 as the date for the next hearing of arguments in the Zia Charitable Trust graft case and extended the bail of Zia, the Bangladesh Nationalist Party (BNP) chief, until then, bdnews24 reported.

“The court has set March 13 and March 14 for the next two days of arguments. Zia’s bail has been extended until March 13,” her lawyer Nuruzzaman Tapan was quoted as saying in the report.

On Sunday, the High Court deferred the judgment on her bail petition, saying it would decide after receiving necessary papers from the lower court which sentenced her to five years in jail in February.

The Zia Charitable Trust graft case, filed in August 2011, accuses four persons, including Zia of abusing power to raise funds for the trust from unknown sources.

The three others are: Harris Chowdhury, political secretary of then prime minister Zia between 2001 and 2006; Ziaul Islam Munna, Assistant Private Secretary (APS) to Harris; and Monirul Islam Khan, APS of former Dhaka city mayor Sadeque Hossain Khoka. The corruption case is one of dozens pending against Zia, who has been a rival to Prime Minister Sheikh Hasina for decades.

The charges against Zia had led to her boycotting polls in 2014, which triggered widespread protests at the time.

Currently, 34 cases are pending against Zia in various courts across the country, including the Zia Orphanage Trust and Zia Charitable Trust graft cases, the report said. The BNP has claimed that the cases are politically-motivated to keep its party chief out of the national elections, set for December.