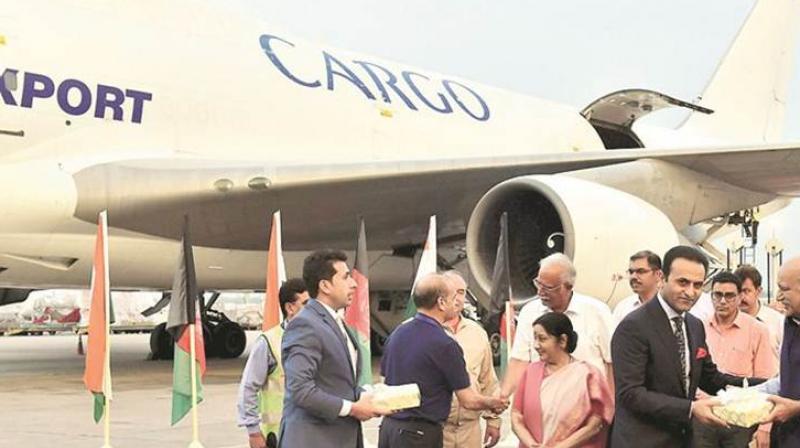 The flight, which carried 60 tonnes of cargo (mainly ‘hing’) from Afghanistan, was flagged off in Kabul by President Ashraf Ghani. (Photo: ANI/Twitter)

India has been closely working with Kabul to create alternate and reliable access routes. It is also working with Afghanistan and Iran for development of the Chabahar Port. A trilateral transport and transit agreement based on sea access through Chabahar was signed by the three countries in May 2016.

The article in the state-run Global Times said that the already launched and the proposed routes in India, Afghanistan and Iran "beg a question: Will India bypass Pakistan to develop trade with Afghanistan and other Central Asian countries?"

"All such connectivity efforts have not only signalled India's desire to more actively participate in regional economic development, but have also highlighted the country's stubborn geopolitical thinking," it said, referring to India's opposition to China-Pakistan Economic Corridor Project (CPEC).

China's USD 50 billion investment in Pakistan is part of its ambition to reach to the Eurasia markets through the Arabian Sea, and the CPEC links its restive Xinjiang province to the southern port of Gwadar in Pakistan's Balochistan province through a maze of road and railway networks.

India opposes the China-Pakistan Economic Corridor project, which in turn is part of the larger Belt and Road (B&R) Initiative as it runs through Gilgit-Baltistan region of Pakistan-occupied Kashmir.

The article said India has "always been pushing back against the Belt and Road Initiative, so its intention to create its own connectivity network appears to be a strategy to counterbalance" the CPEC especially to bypass Pakistan. It argued that Pakistan blocked India from transporting goods through its territory only because of their tense ties.

"It is undeniable that geopolitical issues are complicated in this region, but it would still be better for India to develop economic and trade relations with Pakistan," it said.

"No matter how India is thinking, if the country really wants to participate more in regional economic development, it should not bypass Pakistan, which offers the most efficient and cost-effective land route," it said.

"In this sense, the B&R Initiative has actually created the opportunity and platform for cooperation between India and Pakistan, and now we will see if India can eventually seize the opportunity," it said.