In the past, Pakistan has used the air base to support its Army operations on the border with India 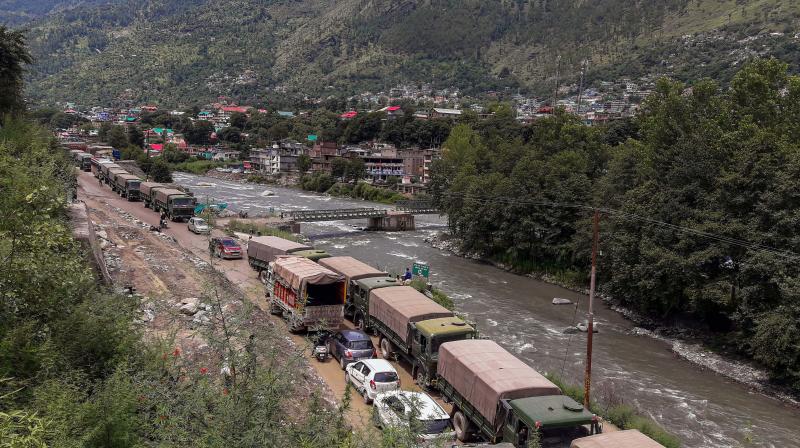 Army vehicles move towards Leh along the Manali-Leh highway, amid the ongoing India-China border dispute, in Kullu district. (PTI)

New Delhi: Amidst India and China military stand-off, Pakistan Air Force (PAF) has carried out exercises at its forward airbase in Skardu near Ladakh in the occupied Gilgit-Baltistan region.

Pakistan has deployed JF-17 Thunder fighter aircraft at Skardu airbase which carried out these exercises.

Pakistan’s state owned broadcaster PTV said that PAF chief Marshal Mujahid Anwar Khan on Saturday visited PAF Base, Qadri at Skardu and witnessed various operational activities at the base including rapid deployment of fighter aircraft and combat support elements. He was also briefed on the ongoing infrastructure development works at the air base.

Pakistan’s media quoted Mr Khan as saying that “the aggressive military procurements by the enemy are not going unnoticed and necessary measures are in place to ensure the balance of military power in conventional domain as well.”

Skardu airbase in PoK is around 100 kilometers from Leh airbase.

In the past, Pakistan has used the airbase to support its Army operations on the border with India.

JF-17 is now the backbone of the Pakistan Air Force (PAF)  defence as the US has stopped sale of new F16 aircraft to Pakistan. Chinese JF-17 is a single-engine fighter which can be used for ground attack and aircraft interception. However, unlike India's top line aircraft Su-30 which can carry 8 beyond-visual-range (BVR) missiles, JF-17 can carry only four BVR missiles.