My story no different from that of hijra: Pak’s 1st transgender news anchor

Malik, 21, said she had lost count of the positive calls/messages she received for her new role which was a major contrast to previous yrs. 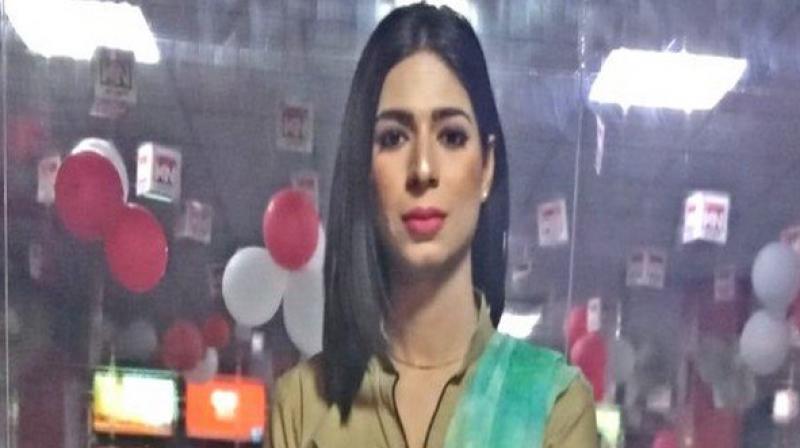 The news of her first appearance on local channel Kohenoor TV on Saturday went viral on social media and was just days after she became the first transgender model on the catwalk at the annual Pakistan Fashion Design Council fashion show. (Photo: ANI)

Karachi:  As the first transgender news anchor in Pakistan, Marvia Malik is proud to be at the forefront of changing attitudes in her country but she says there is a long way to go.

The news of her first appearance on local channel Kohenoor TV on Saturday went viral on social media and was just days after she became the first transgender model on the catwalk at the annual Pakistan Fashion Design Council fashion show.

Her catapult into the spotlight came after transgender activist Zara Changezi was named as star of a love film, the Senate passed a bill to protect transgender people, and a Pakistani province agreed to an X gender on driving licences.

Malik, 21, said she had lost count of the positive telephone calls and messages she had received for her new role which was a major contrast to previous years when she battled to survive.

"I got a lot of appreciation from those associated with the fashion industry when I did catwalk modelling two weeks back, and now this ... it's quite overwhelming," she told the Thomson Reuters Foundation.

"I was thrown out after (10th grade) after which I joined a beauty salon, earned just about enough to put myself through college, but it was not easy. My story is no different from that of a hijra on the street you see begging."

Many "hijras" - which includes transvestites, transsexuals and eunuchs - in Pakistan, as well as other South Asian nations such as India and Bangladesh, are attacked, murdered, raped or forced to work as sex workers, dancers, or beggars.

For although transgender people technically enjoy better rights in Pakistan than in many other nations, in practice they are marginalized and face discrimination in education and jobs.

However campaigners said there were signs of progress in the conservative South Asian nation where homosexuality is a crime.

The Supreme Court ruled in 2009 hijras could get national identity cards as a "third sex" and last year the government issued its first passport with a transgender category.

The transgender community was counted in the national census for the first time last year, recording 10,418 in a population of about 207 million although many said this was too low. Charity Trans Action Pakistan estimates there are at least half a million transgender people in the country.

"Getting a driving permit will not only be a proof of identity but open another livelihood avenue, for instance, finding employment in cab companies," said Qamar Naseem of Peshawar-based Blue Veins that lobbies for transgender people.

Sana Yasir, an intersex educator and physician, said Pakistan was becoming more tolerant of transgender people but acceptance was not yet widespread with many people confusing gender identity with sexual orientation.

"(People) assume being trans means one has a certain orientation, and harness hate against homosexuals, which then shows in their transphobic behaviour," Yasir said.

While Malik is happy that the government is slowly bringing the community into the mainstream, she said the only way to get meaningful change if is "change begins at home".

"We have to tell parents not to be ashamed of their kids who cannot conform to the sex assigned at birth," she said, adding that transgender people were often thrown out by their families.

"We are left with no option but to turn to begging, dancing and selling our bodies."