15 killed, including 6 children, in raids at IS hideout in Sri Lanka

The gun battle between troops and suspected Islamist militants erupted on Friday evening in Sainthamaruthu in Ampara. 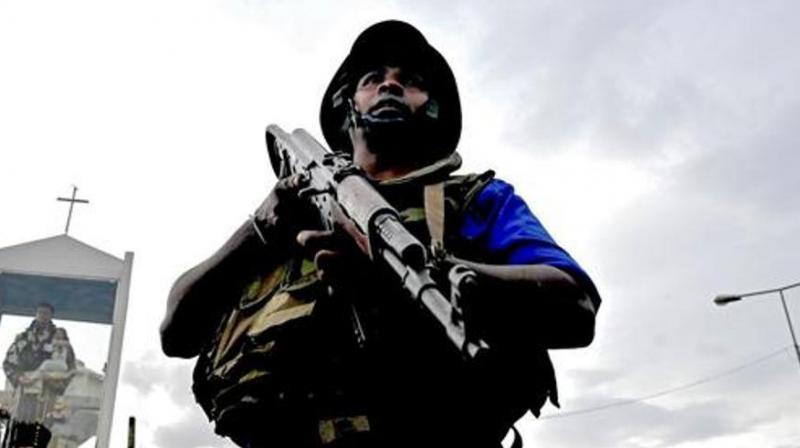 The gun battle comes six days after a rash of suicide bomber attacks that killed more than 250 people. (Photo: AFP)

Colombo: Six children and three women were among 15 people killed when suicide bombers blew themselves up during a shootout with security forces in Sri Lanka's Eastern province, police said Saturday.

The security forces continued their hunt for members of the local terror group National Thowheeth Jamath (NTJ) which was behind the deadly Easter Sunday bombings in which 253 people were killed and over 500 injured. Police Special Task Force (STF) personnel and Army troops were engaged in the gun battle with an armed group at a house in the Saindamarudu area in Kalmunai city, about 360 kms from Colombo.

The heavily-armed men opened fire on troops, leading to the shootout on Friday night. A civilian, who was caught in the gun battle, died. Three men are believed to have set off explosives during the violent clashes. "A total of 15 bodies recovered, six men, three women and six children. At least four suspected suicide bombers are dead and three others who were injured are in hospital," a police spokesperson said.

The curfew imposed in the Muslim-majority areas of Kalmunai, Chavalakade and Sammanthurai would continue until further notice, the police said. "When the police was doing a joint search operation in Sainthamuruthu, gunfire was directed at them," police spokesman Ruwan Gunasekera said. A suicide blast took place and the body of a terrorist with a T56 assault rifle was found at the site. The police said that 20 more people were arrested in connection with the April 21 bombings.

Officials also seized one kg of explosives near a railway station at Wellawatta, a popular south Colombo suburb. The curfew was lifted for other areas at 4 am on Saturday. At the security council meeting held last night, it was decided that search operations to crackdown on extremist terrorism must continue until the threat is completely eliminated.

Security has been improved at hotels, schools and public places. Nine suicide bombers carried out a series of devastating blasts that tore through three churches and three luxury hotels on the Easter Sunday, killing 253 people.

The Islamic State claimed the attacks, but the government has blamed local Islamist extremist group NTJ for the attacks.