Disputes over control of the South China Sea, one of the world's busiest trade routes, are a growing irritant in Beijing's relations with US 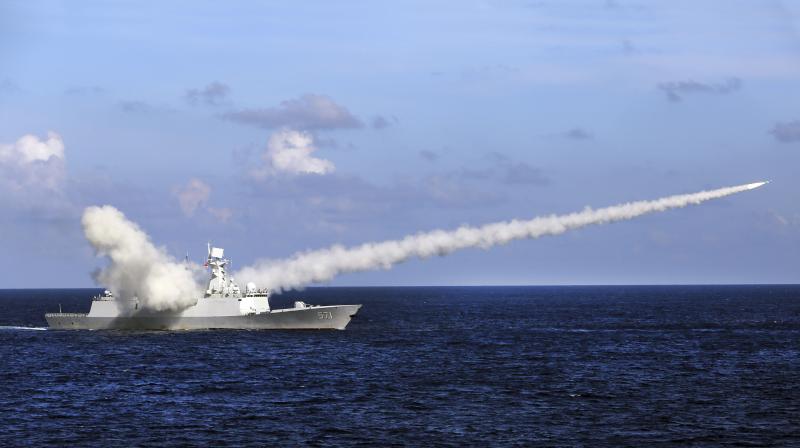 The DF-26B and DF-21D missiles fired Wednesday targeted an area between the southern island province of Hainan and the Paracel Islands.(AP File)

Beijing: China's military test-fired two missiles into the South China Sea, including a 'carrier killer' military analysts suggest might have been developed to attack US forces, a newspaper reported Thursday.

The DF-26B and DF-21D missiles fired Wednesday targeted an area between the southern island province of Hainan and the Paracel Islands, The South China Morning Post newspaper of Hong Kong reported, citing unidentified sources close to the Chinese military.

The ministries of defence and foreign affairs in Beijing didn't immediately respond to requests for confirmation.

Disputes over control of the South China Sea, one of the world's busiest trade routes, are a growing irritant in Beijing's relations with Washington and its southern neighbours.

The Trump administration this year rejected most of Beijing's claims to sovereignty over the majority of the disputed sea, portions of which also are claimed by Vietnam, the Philippines and other governments.

Wednesday's launches followed Chinese complaints that a US U2 spy plane entered a 'no fly zone' declared by Beijing during a military drill off its northern coast.

The DF-21 is unusually accurate and was dubbed 'carrier killer' by military analysts who believe it was developed to target U.S. aircraft carriers that might be involved in a potential conflict with China.

Beijing has spent heavily over the past two decades on trying to develop missiles, fighter aircraft, nuclear submarines and other weapons to allow China to expand its military reach beyond its shores.

The DF-26B was launched from the northwestern province of Qinghai while the DF-21D was fired from Zhejiang province south of Shanghai on the east coast, The South China Morning Post said.

The DF-26 is believed to be capable of carrying nuclear or conventional warheads. That would violate the Intermediate-Range Nuclear Forces Treaty signed by Washington and Moscow during the Cold War. The Trump administration cited China's development of the DF-26 and similar weapons when it withdrew from the treaty last year.